The Last Seven Sayings of Jesus the Christ on the Cross 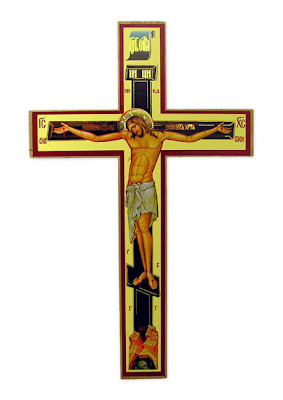 Since the 16th century these sayings have been widely used in the preachings on Good Friday and entire books have been written on the theological analysis, and the devotional elements of the seven sayings.

Physicians and scientists who have studied the medical aspects of the crucifixion concluded that the sayings had to be short because crucifixion causes asphyxia. This makes inhaling air to speak difficult and painful, especially as death approaches.

The seven sayings form part of a Christian meditation that is often used during Lent, Holy Week and Good Friday. The traditional order of the sayings is:

As can be seen from the above list, not all seven sayings can be found in any one account of Jesus' crucifixion. The ordering is a harmonisation of the texts from each of the four canonical gospels. In the gospels of Matthew and Mark, Jesus is quoted in Aramaic, shouting the fourth phrase only, and cries out wordlessly before dying. In Luke's Gospel, the first, second, and seventh sayings occur. The third, fifth and sixth sayings can only be found in John's Gospel. In other words:

In Matthew and Mark :
In Luke:
In John:
Father forgive them, for they know not what they do
Luke 23:34


Then Jesus said, "Father forgive them, for they know not what they do".

This first saying of Jesus on the cross is traditionally called "The Word of Forgiveness". It is theologically interpreted as Jesus' prayer for forgiveness for those who were crucifying him: the Roman soldiers, and apparently for all others who were involved in his crucifixion.

Today you will be with me in paradise
Luke 23:43


And he said to him, "Truly, I say to you, today you will be with me in paradise".

This saying is traditionally called "The Word of Salvation". According to Luke's Gospel, Jesus was crucified between two thieves, one of whom supports Jesus' innocence and asks him to remember him when he comes into his kingdom. Jesus replies, "Truly, I say to you..." (ἀμήν λέγω σοί, amēn legō soi), followed with the only appearance of the word "paradise" in the Gospels (παραδείσω, paradeisō, from the Persian pairidaeza "paradise garden").


Jesus saw his own mother, and the disciple standing near whom he loved, he said to his mother, "Woman, behold your son". Then he said to the disciple, "Behold your mother". And from that hour, he took his mother into his family.

This statement is traditionally called "The Word of Relationship" and in it Jesus entrusts Mary, his mother, into the care of a disciple.


Around the ninth hour, Jesus shouted in a loud voice, saying "Eli Eli lama sabachthani?" which is, "My God, my God, why have you forsaken me?"


And at the ninth hour, Jesus shouted in a loud voice, "Eloi Eloi lama sabachthani?" which is translated, "My God, my God, why have you forsaken me?"

This saying is traditionally called "The Word of Abandonment" and is the only saying that appears in more than one Gospel. This saying is given in Aramaic with a translation (originally in Greek) after it. This phrase is the opening line of Psalm 22. It was common for people at this time to reference songs by quoting their first lines. In the verses immediately following this saying, in both Gospels, the onlookers who hear Jesus' cry understand him to be calling for help from Elijah (Eliyyâ). The slight differences between the two gospel accounts are most probably due to dialect. Matthew's version seems to have been more influenced by Hebrew, whereas Mark's is perhaps more colloquial.


The phrase could be either:


The Aramaic word šabaqtanî is based on the verb šabaq, 'to allow, to permit, to forgive, and to forsake', with the perfect tense ending -t (2nd person singular: 'you'), and the object suffix -anî (1st person singular: 'me').

This statement is traditionally called "The Word of Distress" and is compared and contrasted with the encounter of Jesus with the Samaritan Woman at the Well in John 4:4-26.


Jesus said, "It is finished".

This statement is traditionally called "The Word of Triumph" and is theologically interpreted as the announcement of the end of the earthly life of Jesus, in anticipation for the Resurrection.

Father, into your hands I commit my spirit
Luke 23:46


And speaking in a loud voice, Jesus said, "Father, into your hands I commit my spirit".

This saying, which is an announcement and not a request, is traditionally called "The Word of Reunion" and is theologically interpreted as the proclamation of Jesus joining the God the Father in Heaven.s

The last words of Jesus have been the subject of a wide range of Christian teachings and sermons, and a number of authors have written books specifically devoted to the last sayings of Christ.