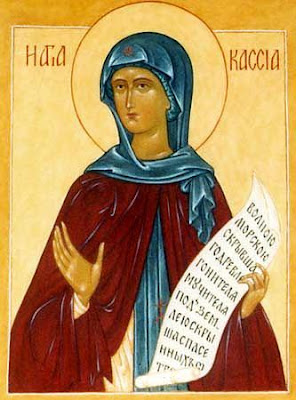 In Christianity, Holy Wednesday (also called Spy Wednesday, and in the Eastern and Oriental Orthodox Churches, Holy and Great Wednesday) is the Wednesday of the Holy Week, the week before Easter. It is followed by Maundy Thursday (Holy Thursday).

In Western Christianity, the Wednesday before Easter is sometimes known as "Spy Wednesday", indicating that it is the day that Judas Iscariot first conspired with the Sanhedrin to betray Jesus for thirty silver coins.

This event is described in the three Synoptic Gospels

was gathered together and it decided to kill Jesus, even before Pesach if possible. In the meantime, Jesus was in Bethany, in the house of Simon the leper. Here he was anointed on his head by Mary, the sister of Martha and Lazarus, with very expensive ointment of spikenard. Some of the disciples were indignant about this; the oil could have been sold to support the poor. Judas went to the Sanhedrin and offered them his support in exchange for money. From this moment on Judas was looking for an opportunity to betray Jesus.

Although it is frequently celebrated on Maundy Thursday or Good Friday, the Tenebrae is a liturgy that is often celebrated on this day. The word tenebrae comes from the Latin meaning darkness. In this service, all of the candles on the altar table are gradually extinguished until the sanctuary is in complete darkness. At the moment of darkness, a loud clash occurs symbolizing the death of Jesus. The 'strepitus', as it is known more probably symbolizes the earthquake that followed Jesus' death:


"And, behold, the veil of the temple was rent in twain from the top to the bottom; and the earth did quake, and the rocks rent" Matthew 27:51.

In the Orthodox Church, the theme of Holy and Great Wednesday is the commemoration of the sinful woman who anointed Jesus before his Crucifixion and Burial; a second theme is the agreement to betray Jesus made by Judas Iscariot.

The day begins with the celebration of the Presanctified Liturgy

on Tuesday afternoon. Later that evening, the Orthros (Matins) follows the special Holy Week format known as the Bridegroom Prayer. Towards the end of Orthros, the Hymn of Kassiani

is sung. The hymn, (written in the 9th century by Kassiani the Nun) tells of the woman who washed Christ's feet in the house of Simon the Pharisee. (Luke 7:36-50) Much of the hymn is written from the perspective of the sinful woman:


O Lord, the woman who had fallen into many sins, sensing Your Divinity, takes upon herself the duty of a myrrh-bearer. With lamentations she brings you myrrh in anticipation of your entombment. "Woe to me!" she cries, "for me night has become a frenzy of licentiousness, a dark and moonless love of sin. Receive the fountain of my tears, O You who gathers into clouds the waters of the sea. Incline unto me, unto the sighings of my heart, O You who bowed the heavens by your ineffable condescension. I will wash your immaculate feet with kisses and dry them again with the tresses of my hair; those very feet at whose sound Eve hid herself from in fear when she heard You walking in Paradise in the twilight of the day. As for the multitude of my sins and the depths of Your judgments, who can search them out, O Savior of souls, my Savior? Do not disdain me Your handmaiden, O You who are boundless in mercy."

The Byzantine musical composition expresses the poetry so strongly that it often leaves many people in a state of prayerful tears. The Hymn can last upwards of 25 minutes and is liturgically and musically a highpoint of the entire year.

On this day members of the church receive Holy Unction

after receiving Holy Communion at the Presanctified Liturgy on Wednesday evening.

It is on account of the agreement made by Judas to betray Jesus on this day that Orthodox Christians fast on Wednesdays (as well as Fridays) throughout the year.