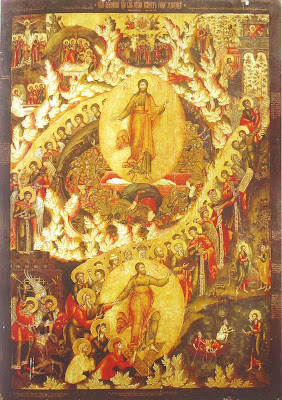 The major Resurrection appearances of Jesus in the Canonical gospels (and to a lesser extent other books of the New Testament) are reported to have occurred after his death and burial but prior to his Ascension. Among these primary sources, most scholars believe First Corinthians was written first, authored by Paul of Tarsus along with Sosthenes circa AD 55. Finally, the Gospel of the Hebrews‎ recounts the Resurrection appearance to James the brother of Jesus.

Paul lists several resurrection appearances of Jesus to various "men". In Matthew, Jesus appears to Mary Magdalene and another Mary at his empty tomb. Later, the eleven disciples go to a mountain in Galilee to meet Jesus, who appears to them and commissions them to baptize in the name of the Father, Son, and Holy Spirit, and to make disciples of all people (the Great Commission).

In Luke, Jesus appears to the disciples and eats with them, demonstrating that he is flesh and bones, not a ghost. He tells them to wait in Jerusalem for the start of their mission to the world, and then he ascends into the heavens. In Acts, written by the same author as Luke, Jesus appears to his disciples after his death and stays with them for 40 days before ascending to heaven. Acts also describes Jesus' appearance to Paul, in which a voice speaks to Paul and a light blinds him while he's on the road to Damascus. In John, Mary alone finds Jesus at the empty tomb, and he tells her not to touch him because he has not yet ascended to the Father. Later, he appears to the disciples. He moves through a closed door and has "doubting Thomas" touch his wounds to demonstrate that he is flesh and bones. In a later appearance, Jesus assigns Peter the role of tending to Jesus' sheep, that is, leading Jesus' followers. The traditional ending of Mark summarizes resurrection appearances from Matthew and Luke.

Appearances reported in the gospels


(Acts of the Apostles)
(1st Corinthians 15)
(Galatians)
(Revelation/Apocalypse)
With the possible exceptions of the appearances to Paul and Ananias in Acts 9, Acts 22, Acts 26 and to Peter in Acts 10, Acts 11 and to John of Patmos in Revelation 1, the Bible only records pre-Ascension appearances of Christ. Yet a number of post-Ascension visions of Jesus and Mary have been reported long after the Book of Revelation was written, some as recently as this century.

In the Orthodox Church, the Resurrection appearances of Jesus which are found in the four Gospels are read at Matins in an eleven-week cycle of Gospel readings, known as The Eleven Matins Gospels.

The Matins Gospel is the solemn chanting of a lection from one of the Four Gospels during Matins in the Orthodox Church and those Eastern Catholic churches which follow the Byzantine Rite.

Every Sunday is a commemoration of the Resurrection of Jesus, and so it is always observed as a feast (in the Slavic churches it is customary to serve an All-Night Vigil every Saturday night).

The Sunday Matins Gospels (known as the "Matins Resurrection Gospels") are an eleven-week cycle of readings taken from the Gospel accounts of the Resurrection appearances of Jesus.

The Sunday Matins Gospels are:
The cycle begins on the Sunday after Pentecost, and continues up to, but not including, Palm Sunday of the succeeding year. The eleven lessons are read in order and without interruption, except on Great Feasts of the Lord—which have their own Matins Gospels—until Pascha (Easter) of the following year. During the Pentecostarion (the period from Pascha until Pentecost), the same Gospels are read at Sunday Matins, but not in the same order.

The Gospel reading is preceded by a prokeimenon, a selection from the Psalms relevant to the theme of the resurrection. These prokeimena are chanted according to an eight-week cycle known as the Octoechos, and are chanted in a different liturgical mode each week of the cycle. The deacon then leads the choir in chanting, "Let every breath praise the Lord", which is chanted in the same mode as the prokeimenon.

On Sundays, the Matins Gospel is read at the Holy Table (altar), which symbolizes the Tomb of Christ. The priest does not hold the Gospel Book during the reading, but reads it as it lies open on the Holy Table. Immediately after the reading, the priest kisses the Gospel Book and hands it to the deacon who brings it out through the Holy Doors and stands on the ambon, holding the Gospel aloft for all to see, while the choir chants the following Hymn of the Resurrection:


Having beheld the Resurrection of Christ, let us worship the holy Lord Jesus, the only sinless one. We venerate Thy cross, O Christ, and Thy holy Resurrection we praise and glorify. For Thou art our God, and we know none other than Thee. We call on Thy name. O come, all ye faithful, let us venerate Christ's holy Resurrection. For behold, through the cross joy hath come into all the world. Ever blessing the Lord, we praise his Resurrection: for by enduring the cross, he hath slain death by death.

During the Paschal season this hymn is chanted three times.

Later in the Matins service, there are two sets of hymns which are chanted in accordance with the Matins Resurrection Gospel that was read that week. One is the Exapostilarion, which is chanted at the end of the canon, and the other is a sticheron called the Eothinon (εωθινόν) which is chanted at the end of Lauds. The Eothinion is chanted to its own special melody, known as an idiomelon. Both of these sets of hymns are traditionally attributed to the Emperor Constantine VII Porphyrogenitus.