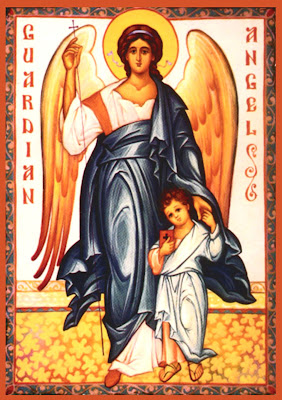 A guardian angel is an angel assigned to protect and guide a particular person or group. Belief in guardian angels can be traced throughout all antiquity. The concept of tutelary angels and their hierarchy was extensively described in Early Christianity  by Pseudo-Dionysius the Areopagite.

Belief in both the East and the West is that guardian angels serve to protect whichever person God assigns them to, and present prayer to God on that person's behalf.

The belief that God sends a spirit to watch every individual was common in Ancient Greek philosophy, and was alluded to by Plato in Phaedo, 108. This Platonic belief is in line (just as is the Platonic doctrine of "ideas") with standard Zoroastrianism. The idea appears to have first been mentioned in the Old Testament.

In Judaism, "The people have a heavenly representative, a guardian angel." The belief that angels can be guides and intercessors for men can be found in Job 33:23-6, and in the Book of Daniel (specifically Daniel 10:13) angels seem to be assigned to certain countries. In this latter case the "prince of the Persian kingdom" was referring to one of the fallen angels also known to many as a demon. The same verse mentions "Michael, one of the chief princes," and Michael is one of the few angels named in the Bible. In the New Testament Book of Jude Michael is described as an archangel. The Book of Enoch, part of the Ethiopian Orthodox Tewahedo Church's canon of scripture, says that God will "set a guard of holy angels over all the righteous" (1 En 100:5) to guard them during the end of time, while the wicked are being destroyed.

In Matthew 18:10, Jesus says of children: "See that you do not look down on one of these little ones. For I tell you that their angels in heaven always see the face of my Father in heaven". This is often understood to mean that children are protected by guardian angels, and appears to be corroborated by Hebrews 1:14 when speaking of angels, "Are they not all ministering spirits, sent forth to minister for them who shall be heirs of salvation?"

In Acts 12:12-15 there is another allusion to the belief that a specific angel is assigned to protect each individual. After Peter had been escorted out of prison by an angel, he went to the home of 'Mary the mother of John, also called Mark'. The servant girl, Rhoda, recognized his voice and ran back to tell the group that Peter was there. However the group replied, "It must be his angel"' (12:15). With this scriptural sanction, Peter's angel was the most commonly depicted guardian angel in art, and was normally shown in images of the subject, most famously Raphael's fresco of the Deliverance of Saint Peter in the Vatican.

According to St. Jerome the concept is in the "mind of the Church" and he stated that: "how great the dignity of the soul, since each one has from his birth an angel commissioned to guard it."

The guardian angel concept is clearly present in the Old Testament, and is well marked. The Old Testament conceived of God's angels as his ministers who carried out his behests, and who were at times given special commissions, regarding men and mundane affairs.

In Genesis 28-29, angels not only act as the executors of God's wrath against the cities of the plain, but they deliver Lot from danger; in Exodus 32:34, God says to Moses: "my angel shall go before thee." At a much later period we have the story of Tobias, which might serve for a commentary on the words of Psalm 91:11: "For he hath given his angels charge over thee; to keep thee in all thy ways." (Cf. Psalm 33:8 and 34:5) Lastly, in Daniel 10 angels are entrusted with the care of particular districts; one is called "prince of the kingdom of the Persians", and Michael is termed "one of the chief princes"; cf. Deuteronomy 32:8 (Septuagint); and Ecclesiasticus 17:17 (Septuagint).

In the New Testament the concept of guardian angel may be noted with greater precision. Angels are everywhere the intermediaries between God and man; and Christ set a seal upon the Old Testament teaching: "See that you despise not one of these little ones: for I say to you, that their angels in heaven always see the face of my Father who is in heaven." (Matthew 18:10). A twofold aspect of the doctrine is here put forth: even little children have guardian angels, and these same angels lose not the vision of God by the fact that they have a mission to fulfil on earth.

Other key examples in the New Testament are the angel who succoured Christ in the garden, and the angel who delivered St. Peter from prison. Hebrews 1:14 puts the doctrine in its clearest light: "Are they not all ministering spirits, sent to minister for them, who shall receive the inheritance of salvation?" In this view, the function of the guardian angel is to lead men to the Kingdom of Heaven.

An Eastern Orthodox prayer to the Guardian Angel:


O Angel of Christ, my holy Guardian and Protector of my soul and body, forgive me all my sins of today. Deliver me from all the wiles of the enemy, that I may not anger my God by any sin. Pray for me, sinful and unworthy servant, that thou mayest present me worthy of the kindness and mercy of the All-holy Trinity and the Mother of my Lord Jesus Christ, and of all the Saints. Amen.

There is a similar Islamic belief in the Kirama Katibin, two angels residing on either shoulder of humans which record their good and bad deeds. However, these angels do not have influence over the choices one makes, and only record one's deeds.

Also known as Arda Fravaš ('Holy Guardian Angels'). Each person is accompanied by a guardian angel, which acts as a guide throughout life. They originally patrolled the boundaries of the ramparts of heaven, but volunteer to descend to earth to stand by individuals to the end of their days.