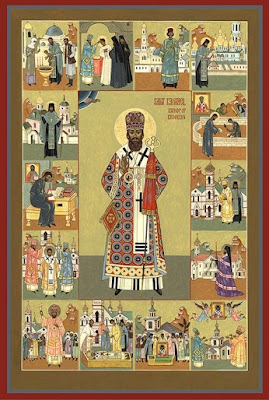 Saint Raphael of Brooklyn (November 20, 1860 – February 27, 1915), also known as Father Raphael, was born as Raphael Hawaweeny (Arabic: رفائيل هواويني‎) in Beirut, Lebanon, of Damascene Syrian parents. He was first educated at the Damascus Patriarchal School that had become the leading Greek Orthodox institution of higher learning in the Middle-East under the leadership of Saint Joseph of Damascus. He furthered his study of Christian theology at the Patriarchical Halki seminary in Turkey, and at the Theological Academy in Kiev, Russian Empire (now Ukraine).

Father Raphael was sent to New York City in 1895 by Tsar Nicholas II of Russia to administer the local Orthodox Christian community then composed essentially of Russian and Middle-Eastern immigrants. In 1904 he became the first Orthodox bishop to be consecrated in North America; the consecration was performed by Archbishop (Saint) Tikhon of Moscow and Bishop Innocent in New York City. He served as Bishop of Brooklyn until his death.

During the course of his ministry as an auxiliary bishop of the Russian Orthodox Church in America St. Raphael founded the present-day cathedral of the Antiochian Orthodox Archdiocese of North America, established twenty-nine parishes, and assisted in the founding of St. Tikhon's Orthodox Monastery.
Saint Raphael was originally buried in New York until August 1989 when his relics were translated to the Antiochian Village Camp in Ligonier, Pennsylvania, on property of the Antiochian Archdiocese along with several other bishops and clergy.

Bishop Raphael was glorified by the Holy Synod of the Orthodox Church in America (OCA) in its March 2000 session. He is commemorated by the OCA on February 27, the anniversary of his death, and by the Antiochian Orthodox Church on the first Saturday of November.