The Feast of the Chinese Martyrs 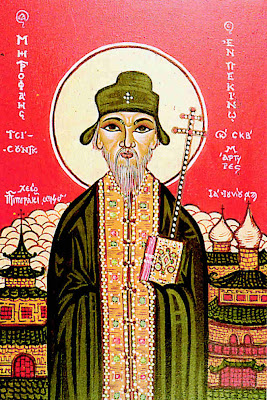 One of the best-kept secrets in the Orthodox world has to be the existence of the Chinese Martyrs who celebrate their feast day on June 11th. Almost everyone was unaware of the fact that not even one hundred years ago, a group of Chinese Orthodox Christians gave up their lives for Christ and His Church in the great city of Beijing.

It was the time of the Boxer Rebellion, which held foreigners responsible for every misfortune that took place. The first to suffer were the Christians, and in 1899 the first English missionary was killed. On the 10th of June, proclamations were posted on walls all over Beijing, calling on the Chinese to slaughter all Christians and threatening all those Christians who tried to hide with martyrdom.

On the 11th of June, China shone in glory as it would offer her share of martyrs for the Church. According to Dr. Piperakis of the University of Athens, the events are described:


"The executioners' procession set off triumphantly with burning torches, as the idols of the traditional god of the Chinese were carried aloft. Censers were held so that the Christians could cense the idols, and thus deny their 'alien' faith. The pressure was unbearable, the martyrdoms most terrible. The fear was great. The Orthodox Christians' homes were surrounded. Threats and violence were used to force the Orthodox to sacrifice to false gods and deny Christ.

Unfortunately, as with all oppression, many capitulated and burnt incense to the idols to save their lives, while others who were stronger in faith boldly confessed Christ. The latter, the confessors, were led out of the city to the Boxers' idol worshipping temples. Here, after indescribable torture, cutting them open and pulling out their entrails and the like, they were finally beheaded or burnt to death. The martyrs' houses suffered the same fate as their owners. Churches and Orthodox institutions were also given over to the flames. All the church buildings (with the exception of the one in Hankow), the Sino-Russian Library and the print shop with its 30,000 wood-carved Chinese characters were set alight and burnt to ashes. The Russian missionaries managed to flee to Chien-Chin and then to Shanghai. Of the 700 Orthodox Chinese believers, 300 were martyred for their faith [1]. Taking into account its low numbers, the Orthodox Church of China gave up more martyrs than the more populous heterodox Churches."

Included in those who received the crown of martyrdom was the first Chinese heiromartyr, St. Mitrophan Chi-Sung:


"St. Mitrophan was the first Orthodox Chinese priest. He was ordained by St. Nicholas of Japan and served the Orthodox mission for fifteen years. He sat among the ruins of the burnt-out Orthodox Mission, enveloped by the men, women and children of his flock, then they started to hit his chest with fists. His Presbytera (Matushka) Tatiana and his 23-year-old son, Isaiah, were slaughtered before his very eyes, while they cut off the nose, ears and toes of his younger son, John. Not only did the child martyr refuse to complain of protest, but miraculously he felt no pain.

The executioners taunted him, calling him a "child of demons". He answered saying, "I am an Orthodox Christian and I believe in Christ, not in demons". After Father Mitrophan's execution, his future daughter-in-law, 19 year old fiancée of now-martyred Isaiah, arrived at the priest's house. She wanted to die together with the family of her betrothed. When the Boxers surrounded the house, Maria helped many of the faithful jump over garden walls. She faced her executioners with courage and reproached them for the unjust murder of so many innocent souls, who were not tried by any court. The executioners pierced her feet and wounded her hands, encouraging her to leave and be saved. Brave Maria answered boldly, "I was born here at the Church of the All-Holy Mother of God, I will die here, too." Then the Boxers executed her."

Of the 1,000 people that were in the Beijing parish, 222 received the crown of martyrdom [1] and constituted the glorious sacrificial beginning of the 20th century, which would soon turn purple by the river of blood that flowed out of the vast expanses of Russia.

However, the small Church of the Chinese people proclaim through their martyrdom that Orthodoxy has no borders and is above race, nations, and languages. The Orthodox Church is the Church of all nations, people, languages, and stands before God to offer praise and worship.

[1] "Of the 1,000 flock of the Russian Ecclesiastical Mission about 300 have been lost. A few of them renounced the Faith, but most, numbered 222, became holy confessors and martyrs for Christ." (Pervye Christianskie Mucheniki iz Pravoslavnykh Kitaitsev. Za Tserkov, 19, 1936, p. 1-3)