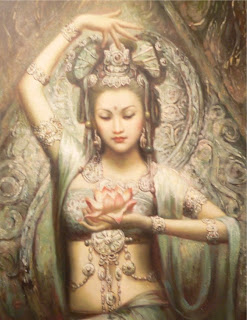 March 17th is St. Patrick's Day - time to hoist a pint of green beer in honor of Ireland's most renowned personage. The popular saint is credited with bringing Christianity to Ireland. Every March 17th, the Irish pay homage to St. Patrick by feasting on traditional Irish dishes.
Birthday for a Buddhist Goddess

Around the same time, the Chinese celebrate the birthday of the Buddhist Goddess of Mercy. Kuan Yin is considered to be the perfect loving mother and the embodiment of compassion. Given these feminine qualities, it is surprising that Kuan Yin was originally thought to be a male god. Worship of Avalokiteshvara, whose name means "observing sounds," or "the lord who takes note of the world," originated in northern India and spread to China by the 1st century AD.

It's not clear why the Chinese transformed Avalokiteshavara into a female form, although it may be that they felt the qualities he embodied were more suited to a female deity. In any event, Kuan Yin was widely depicted as a female by the ninth century AD.

It is believed Kuan Yin has the power to relieve suffering and bestow prosperity; women having trouble conceiving pray to Kuan Yin for children. Kuan Yin is sometimes depicted as having one-thousand hands, each with an eye, enabling her/him to direct a compassionate gaze on all of the world's misery.

Although St. Patrick may lack similar powers, he is revered in Ireland for good reason. Born in Britain of Roman descent, as a youth he was kidnapped by Irish raiders and forced into slavery. For six years he labored as a sheep herder before escaping from his master and returning to Britain. Despite this traumatic experience, he returned to Ireland after having a prophetic dream. Once there, he had remarkable success in converting the Irish from paganism to Christianity. (Another story, unproven, is that he drove the snakes away).

There are many legends surrounding Avalokiteshvara, who is probably the most popular of the Buddhist gods. In one legend his head splits with distress over the number of sinning souls in the world to be saved. In another, he cries with exhaustion and his tears turn to lotus flowers. One of the more celebrated legends surrounding St. Patrick has him using the three-leafed shamrock to illustrate the idea of the Holy Trinity (Father, Son, and Holy Ghost).

While St. Patrick's day falls on March 17th, the birthday of Avalokiteshvara or Kuan-yin is celebrated on the 19th day of the second lunar month. In 2007 this falls on April 6th. Something else that both of these celebrations have in common is food. Traditional dishes served on St. Patrick's day include soda bread and pigs trotters. Since noodles are associated with longevity in Chinese culture, it is not surprising that vegetarian noodles in soup is the traditional food that marks Kuan-yin's birthday. Other festive dishes are served as well: while some contain poultry and fish, vegetarian food is more common, in accordance with stricter Buddhist beliefs. Some devout Buddhists actually observe a period of fasting starting on the first day of the second moon to give the day more religious significance.

"May the road rise to meet you, may the wind always be at your back… May God hold you in the palm of his hand." (Irish Blessing)
at 09:13

I like to think that Avalokiteshvara/Kwan Yin is depicted as both a man and a woman because this Bodhisattva has equal compassion for everyone, men and women.

This image of Kuan yin (Quan Yin Eight)
Do you know who is the artist?
I've been searching endlessly

You can buy a scroll of this very artwork for $125 at http://www.tybro.com/html/the_divine_goddess_kwan_yin.html