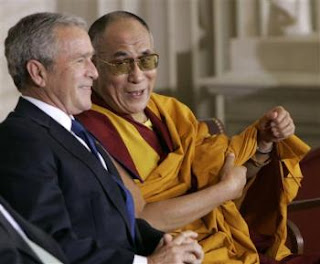 Reports have been coming in that people trying to reach Google, Yahoo and Microsoft from within China or via Chinese ISPs are being redirected to Baidu.

Some have accused Baidu of hijacking the traffic, but we think it's likely that China is upset with the US over the award it granted to the Dalai Lama and is retaliating by hurting US-based search engines.

Back in 2002, when China was upset with Google, it similarly redirected traffic. From a Reuters article at that time:

Some users in Beijing and Shanghai were redirected to Peking University's no-frills search site Tianwang, the little known cj888.com and the German-invested Baidu.com, among others. Users in Guangzhou were rerouted to the local portal 21cn.com. Information Industry and Internet officials had no comment on the move. Sites gaining exposure from it denied any role in the reroutings. "It is definitely not done by us," said a Baidu official. "We have no idea where it comes from."

Google's China Problem (and China's Google Problem) is a long New York Times Magazine article from 2006 that looked back at Google being blocked, how filtering is done in China and accusations that Baidu helped get Google into trouble, something the company denied:

Brin is too diplomatic to accuse anyone by name, but various American Internet executives told me they believe that Baidu has at times benefited from covert government intervention. A young Chinese-American entrepreneur in Beijing told me that she had heard that the instigator of the Google blockade was Baidu, which in 2002 had less than 3 percent of the search market compared with Google's 24 percent.

Wikipedia also has an entry on how censorship works. Reports have also been out this week about censorship in general being ramped up because of the Chinese Communist Party Congress that's happening this week, a once-every-five years major event.

We are also checking directly with the three major search engines for comments. Discussion is also now on Techmeme here and here.

We'll keep updating below as more comes in about the story. So far:

Blognation does some testing from Beijing, finds things are working OK in many cases as long as searches for forbidden terms aren't done.

YouTube launched a site for Taiwan, which some think might have irritated China. Doesn't explain redirecting the others, however.

Google itself confirms the blocking and redirection and sent us this:

We've had numerous reports that Google.cn and other search engines have been blocked in China and traffic redirected to other sites. While this is clearly unfortunate, we've seen this happen before and are confident that service will be restored to our users in the very near future.

YouTube and Flickr were also both blocked Wednesday, but that might indicate China was upgrading its blocking technology in general -- which might have led to the further blocking of search sites more than was perhaps intended.
at 11:25