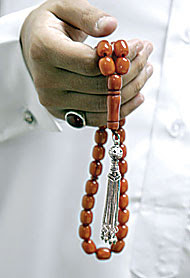 Muslim explorers and traders most likely brought the Buddhist prayer bead tradition to Islam. No definitive date is known for the introduction of their prayer beads or "Subha", which means, "to exalt". The 99-bead strand is divided into 33 bead sections by marker (Ruku) beads. The 100th bead (Imam) or "leader bead" signifies the completion of one cycle of devotion or "one has come full circle". Cords come out of the leader bead and are attached to two (Ruku) beads and a tassel. It is believed evil spirits do not like dangling objects, making the tassel effective in warding off the "evil eye". Each of the 99 names of Allah, and his attributes, are represented by beads. Only the camels know the 100th name. "Allah" is uttered on the leader or 100th bead. The Muslim's major prayers are the Tahmid (God Be Praised) and Tahlit (There Is No Deity But Allah). Forgiveness is achieved by repeating these 100 times morning and night. While the preferred bead material is clay, from the holy cities of Mecca or Madina, any material from wood to precious and semi-precious stones especially quartz crystal or agate is utilized. (Dubin)

However, although the dhikr Allah has been recited from the time of the Prophet, the sibhah as we now know it today has not been recorded as being in existence at that time. Some accounts of history show that Muslims adopted the sibhah from India in the 2nd Islamic century and through them, in 1214, that the Christians adopted the idea and started using the rosary (Gulik).

However, methods of assistance have always been employed in religious devotion even before the sibhah. Tradition states that before the sibhah, stones were sometimes used to recite. Other religions used knotted cords or woven shawls to keep track of recitations.

Modern technology, however, has added a new dimension to prayer beads when electronic sibhah were invented. Many people even prefer not to use a sibhah at all. However, using a sibhah is not only helpful in keeping track of remembrances, but can be healing as well, depending on which wood or gemstone has been used to make the beads.

And just as using beads for prayer is a long-standing tradition, so is healing with beads. Throughout history cultures have used gemstones and wood for healing. Dr. Robert Frost, a physician in Basel, Switzerland, recently studied the scientific properties of these gemstones and woods and created a method of testing woods and gemstones that reveals their healing properties in scientific terms (Frost). In his clinical work, Dr. Frost discovered that using the correct gemstone or wood could reduce pain, prevent allergic reactions, improve coordination and even increase muscle strength.

TIGER'S EYE is traditionally used to enhance understanding and strengthen belief. It is healing to the stomach area and is often used to assist with problems of the kidney, pancreas, liver, small intestine or stomach. It has also been found to have a calming effect on people who hold it.

TURQUOISE keeps the feeling of unconditional love in one's heart and helps one feel more connected with Allah. It also assists in the digestion of proteins and thus aids digestion. Turquoise also helps draw out negative feelings such as envy or anger from a person. It assists in healing ailments of the thyroid, throat, ears, neck and respiratory system. It can also help to combat allergies or heart problems.

AMBER beads can help lift the heaviness of burdens, amethyst can be spiritually uplifting or heal the stomach or liver, and black onyx helps one to change bad habits. There are many books and websites that speak about the healing power of gems. Beware in your search, as some sites are mystical and foreboding. But there are an equal number of scientific books and websites that offer information on gemstones to the general public.

The healing power of WOODEN prayer beads is often in their scent, which is released and revived with usage. The scent of rosewood is traditionally used for nervous tension, frigidity, and headaches. It also assists the immune system, helps to fight viruses and regenerate cells. It is good for jet lag and skin inflammations and has the ability to relax a person without making them drowsy.

Beads made of SANDALWOOD emit a scent that has been used for healing since the time of the prophet. Sandalwood is an antidepressant, antiseptic, insecticidal, and sedative wood. It can assist in the healing of cells and is used to assist the immune system in any healing process or to prevent illness.

In the Tafseer of Ibn Juzayy, it is said that the Prophet Mohammad said in a message from Allah, "I am in my slave's opinion of me and I am with him when he remembers me. If he remembers me in himself, I remember him in my self." For this reason and the reason of easy transport, prayer beads are a popular gift from one Muslim to another. With a little more thought, this gift can be physically uplifting as well as spiritually.
at 05:18