How the Christian Denominations Came to China 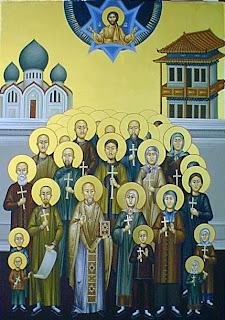 In the Ninth Year of Jingguan (635 A.D.) during the reign of the Taizhong Emperor of the Tang Dynasty, a hieromonk from the Persian Empire by the name of Alopen, bearing scriptural texts (probably in Syriac), arrived at the imperial capital of Chang-An (Xian). He was received favorably by the Tang authorities, who granted facilities for a place of worship to be erected for him and his co-religionists. The Tang was one of the most open of Chinese dynasties, and Buddhist records state three temples were built in the imperial capital at that time for three different religions of Persian origin. Alopen’s temple, however, was later renamed the temple of "Roman" origin because, it is believed, his religion, which spoke of a virgin giving birth to the Holy One in the Roman Empire, came originally not from the empire of the Persians, but from a province of Rome.

From a historical perspective, Alopen’s arrival in China in 635 was in the nick of time. Mohammed’s Hegira to Medina took place in 622, marking the beginning of Islam’s expansion, and in 642 the Persian Empire fell to Muslims. Adherents of Nestorian Christianity, who traditionally practiced their religion in lands east of the Byzantine Empire, were no longer to find Persia a safe haven or power base thereafter.

And yet Nestorian Christianity survived in China for at least two more centuries, and made a brief comeback under the Yuan (Mongol) Dynasty (1277 - 1368) because some Mongols at the time of Genghis Khan and Kublai Khan were Nestorians. We know Alopen’s religion was Nestorian Christianity because of the famous "Nestorian Tablet" unearthed in Xian in 1625 (now in the Xian Museum), giving an account of the earlier years of the religion, and from the 1909 discovery of Nestorian Chinese-language scriptural texts sealed in the Dunhuang caves in northwest China. The tablet unearthed in 1625 gives the Second Year of Jianzhong (781 A. D.) as the year of its erection and bears some Syriac writing in addition to its Chinese script.

Nestorian Christianity did not survive in China and Mongolia. The general perception in China was that it was a foreigners’ religion. It was a minority religion among Mongols, all of whom eventually embraced tantric Buddhism.

It was during the Yuan Dynasty - a period of substantial territorial expansion spearheaded by Mongol horsemen - that Roman Catholic missionaries first made contact with China. The earliest missionaries were Franciscans. Pope Nicholas IV sent John of Monte Corvino as the head of a missionary delegation which arrived in Beijing in 1289, where he died in 1328. The Franciscan efforts continued through 1346, with the departure of John of Marignolli for Avignon. Despite the fact that there were Chinese converts, Roman Catholicism died out in China until the return of Jesuit missionaries during the Ming Dynasty, under the leadership of Matteo Ricci who arrived in Macao in 1580. Thereafter, Roman Catholicism slowly began to take root.

Roman Catholic missionary priests were often valued calendrists, astronomers, cartographers and engineers in the imperial court. One achievement of four centuries of Roman Catholic missionary experience in China was the resolution of the Chinese traditions and rites controversy. The Jesuits made substantial headway initially in accommodating the Chinese veneration for ancestors and Confucius. The Dominicans and Franciscans who arrived in the 17th century questioned the accommodations reached.

The disputes embroiled numerous Popes who were asked to rule on practices in China: could Catholics take part in rituals honoring Confucius? Could they burn incense before wooden tablets bearing the names of their ancestors to show veneration? Pope Clement XI’s 1704 decision against the Jesuits, formalized in his 1715 encyclical "Ex Illa Die" and reinforced by Pope Benedict XIV’s decision in 1742 to ban further discussions, brought the matter to a head. The Kangxi (Kang Hsi) Emperor, one of Qing China’s greatest emperors, ordered the expulsion of Catholic missionaries in 1721. He made clear in a written edict copied to the Pope that practices flowing from those instituted by the Jesuit Matteo Ricci were acceptable, but that subsequent hierarchs who challenged Chinese tradition were ignorant of the Chinese language and classics. The ban imposed by Rome was not lifted till 1939, when Pope Pius XII authorized Chinese Catholics to venerate their ancestors and Confucius in public ceremonies.

Protestantism arrived much later, but achieved impressive successes because of the evangelical zeal of a number of major denominations. The first arrival was the Rev. Dr. Robert Morrison, who was sent by the London Missionary Society. He arrived in Macao in 1807 and devoted his life to work among the Chinese. He and his assistant William Milne are remembered for their leadership and work in rendering the Old and New Testaments into Chinese, a project completed in 1819. Dr. Morrison died in Guangdong in 1834 and was buried in the Protestant Cemetery in Macao.

On the heels of Dr. Morrison, Protestant missionaries from many denominations started arriving in China in the first half of the 19th century. They came from Britain, the United States, Germany, Switzerland, Canada and Scandinavia, and included Presbyterians, Baptists, Methodists, Congregationalists, Seventh Day Adventists, Lutherans, Quakers, German and Swiss Evangelicals (the Basel and Rhenish mission societies), as well as many others. There were (and are) missions set up and based in Western countries whose main purpose was to evangelize China. The Bible Societies and the YMCA and YWCA also became established in China. The Anglican church set up dioceses in Hong Kong and Shanghai which became bases of mission work..

Long years of missionary work by both Roman Catholics and Protestants bore fruit in that, unlike Nestorianism, they did not die out. When the Communist Party took control of mainland China in 1949 it found that both religions were well entrenched in China, particularly among the better-educated Chinese. In accordance with communist practice, the state extended recognition to them by legally registering them as valid religions and putting them under the supervision of the religious affairs bureau. This entailed the severance of the Roman Catholic Church in China from leadership and administration by the See of Rome, and the state-guided merger of all Protestants into a "Three-Self" Patriotic church movement. Nevertheless Christian faith and practice continued, even through the most difficult days of the Cultural Revolution, and the churches have today re-emerged with renewed vigor as China develops into a more open society. They now constitute two of the five "religions" recognized by the Chinese state (the other three are Buddhism, Taoism and Islam).

Recent official documents in the Mainland are said to assess the number of Protestants at close to 30 million - many more than in 1949 - and the number of Catholics at more than eight million (the Church of Rome puts the figure at about 10 million, including both "underground" and "open" church Catholics). The documents further point out that even Communist Party members are known to take part in religious services - it is estimated that more than one million party members have joined religious groups. This proves that man’s spiritual dimension requires fulfillment, and may not be suppressed.
at 00:00