Entrance of the Theotokos 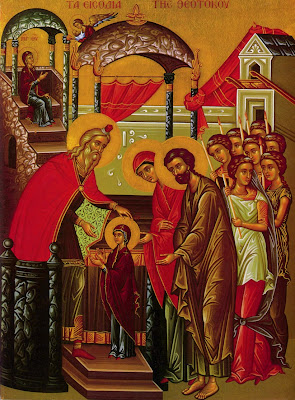 On Monday, November 21, Orthodox Christians celebrate one of the Church's twelve major feasts: The Entrance of the Theotokos into the Temple. The historical events connected with this event form part of Sacred Tradition and are described in early extra-Scriptural documents and in the hymns of the Church.

According to these sources, when St. Mary was three years old her parents, Sts. Joachim and Anna, the grandparents of Jesus, sent their daughter to the Temple in fulfillment of a promise made at the time of her conception, that she would be dedicated to the Lord. Joachim did not want Mary's departure to be a sad occasion. He, therefore, gathered together young girls from the neighborhood, gave them lit candles or lanterns, and Mary intrigued by the bright lights happily followed them to her new home. She was met at the Temple by St. Zacharias, the future father of St. John the Baptist. There she dwelt until her betrothal to St. Joseph.

The meaning of this feast can be derived from its title: Mary enters the Temple to become herself the Temple of God. She enters the Holy Place to become a "living" Holy of Holies. In her womb the Fashioner of all creation will be fashioned. He will take for Himself a complete humanity, our entire human substance, from Mary. Everything we are He will become, and the years spent in the Lord's House prepare the Virgin for her role as Theotokos, the Birth-giver of God. There she is nourished physically, mentally and spiritually, to become the flower of Old Testament piety. Indeed, Tradition relates that Mary was fed by messengers of God while in the Temple. Sometimes this pious belief is depicted artistically with Mary represented twice in the festal icon: once in the center, escorted by Joachim, Anna and the young maidens as she enters the Temple; and once in the top, right corner, seated "near the door of the Holy of Holies, where an angel comes to assist her" (The Meaning of Icons

As the dwelling place of God, Mary typifies humanity. Her entering the Temple and later her conception of the Messiah, signals an end to a strict identification of God's House with any man-made structure. "Man" is now revealed as the true and proper dwelling place of the Almighty. According to ancient Christian Tradition, "we are all fashioned in God's image and likeness to be abodes of His presence".


"Do you not know that you are God's temple and that God's Spirit dwells in you? If anyone destroys God's temple, God will destroy him. For God's temple is holy, and that temple you are" (1 Corinthians 3:16-17).

The emphasis on man as the abode of God is applied not only to the individual but to the entire people of God. The Church, for example, is spoken of by St. Paul as, "the fullness of Him Who fills all in all" (Ephesians 1:23), the fullness of God's life, revealed and shared with His followers. Mary's entrance into the Temple is thus an essential reminder and celebration of our own entrance into the Church, through baptism and chrismation, at which time we are offered to God, and reborn of "Water and the Spirit."

As far as services are concerned, it is significant that "the feast of the Entrance of Mary...marks the first specific liturgical announcement of the birth of Christ". On the eve of this holiday the Nativity canon is sung during Matins, at the Vigil service, and at each subsequent major Vigil until Christmas. The troparion (main theme song) for the day exclaims why this is: 'Mary's appearance in the Temple is an anticipation of the Messiah's Advent.' In Orthodoxy Mary is always contemplated in light of her role as Jesus' mother. The liturgical art of the Church bears this out. Icons of Mary almost always depict the Incarnate Word as well. Even the most traditional name used for Mary, "Theotokos," identifies her directly with Christ. There is no separate cult of Mary in Orthodoxy. Instead, "Mariology is simply an extension of Christology" for Orthodox Christians (The Orthodox Church

). So it is, that as we celebrate the Entrance of the Theotokos during Advent we look forward already to the birth of her Son on December 25.


"Today is the prelude of the good will of God, of the preaching of the salvation of mankind. The Virgin appears in the Temple of God, in anticipation proclaiming Christ to all. Let us rejoice and sing to her: Rejoice O Fulfillment, of the Creator's dispensation." (Troparion)

In closing we shall quote from the Psalter, verses that are understood as prophetic utterances directly related to Mary. They are used 'extensively in the services of this particular feast and have no doubt provided a great inspiration for the celebration of Mary's consecration to the service of God in the Temple'.


"Hear, O Daughter, and consider and incline your ear; forget your people and your father's house, and the King will desire your beauty. Since He is your Lord, bow to Him...
"The princess is decked in her chamber with gold-woven robes, in many-colored robes she is led to her King, with her virgin companions, her escort, in her train...
"Instead of your fathers shall be your sons; you will make them princes in all the earth. I will cause your name to be celebrated in all generations, therefore, the peoples will praise you forever and ever" (Psalm 45: 10-17)