On Ghosts, Wandering Spirits and Demons by Saint John Chysostom 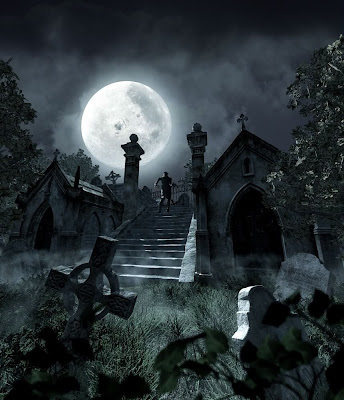 Here, before I proceed, I desire to remove a wrong impression from your minds. For it is a fact that many of the less instructed think that the souls of those who die a violent death become wandering spirits (or demons).

But this is not so. I repeat it is not so. For not the souls of those who die a violent death become demons, but rather the souls of those who live in sin; not that their nature is changed, but that in their desires they imitate the evil nature of demons. Showing this very thing to the Jews, Christ said, "Ye are the children of the devil," (John 7:44). He said that they were the children of the devil, not because they were changed into a nature like his, but because they performed actions like his. Wherefore also He adds: "For the lusts of your father ye will do." Also John says: "O generation of vipers, who hath warned you to flee from the wrath to come? Do therefore works meet for repentance. And think not to say, We have Abraham for our father" (Matt. 3:7-9). The Scripture, therefore, is accustomed to base the laws of relationship, not on natural origin, but on good or evil disposition; and those to whom any one shows similarity of manners and actions, the Scripture declares him to be their son or their brother.

But for what object did the evil one introduce this wicked saying? It is because he would strive to undermine the glory of the martyrs. For since these also died a violent death, he did this with the intention of spreading a low estimation of them. This, however, he is unable to effect; they remain in possession of their former glory. But another and more grievous thing he has brought to pass; he has, by these means, persuaded the wizards who do his work to murder many innocent children, expecting them to become wandering spirits, and afterward to be their servants. But these notions are false - I repeat they are false. What then if the demons say, "I am the spirit of such and such a monk"? Neither because of this do I credit the notion, since evil spirits say so to deceive those who listen to them.

For this reason St Paul stopped their mouth, even when speaking the truth, in order that they might not, on this pretext, at another time mingle falsehood with the truth, and still be deemed worthy of credit. For when they said, "These men are the servants of the Most High God, which show unto us the way of salvation," (Acts 16:17) being grieved in spirit, he rebuked the sorceress, and commanded the spirits to go out. What evil was there in saying, "These men are the servants of the Most High God"? Be that as it may, since many of the more weak-minded cannot always know how to decide aright concerning things spoken by demons, he at once put a stop to any credence in them. "If," he implied, "thou art one of those in dishonor, thou hast no liberty of speaking: be silent, and open not thy mouth; it is not thy office to preach; this is the privilege of the apostles. Why dost thou arrogate to thyself that which is not thine? Be silent! Thou art fallen from honour." The same thing also Christ did, when the evil spirits said to Him, "We know Thee who Thou art," (Mark 1:24; Luke 4:24). He rebuked them with great severity, teaching us never to listen to spirits, not even when they say what is true. Having learnt this, therefore, let us not trust at all in an evil spirit, even though he speak the truth; let us avoid him and turn away. Sound doctrine and saving truth are to be learned with accuracy, not from evil spirits, but from the Holy Scripture.

To show that it is not true that the soul, when it departs from the body, comes under the dominion of evil spirits, hear what St Paul says: "He that is dead is freed from sin," (Rom. 6:7) that is, he no longer sins. For if while the soul dwells in the body, the devil can use no violence against it, it is clear that he cannot when the soul has departed. How is it then, say they, that men sin, if they do not suffer any violence? They sin voluntarily and intentionally, surrendering themselves without compulsion or coercion. And this all those prove who have overcome the evil one's devices. Thus [Satan] was unable to persuade Job to utter any blasphemous word, though he tried a thousand plans. Hence it is manifest that it is in our power either to be influenced or not to be influenced by his counsels; and that we are under no necessity nor tyranny from him. And not only from that which has just been said, but from the parable, it is quite certain that souls when they leave the body do not still linger here, but are forthwith led away. And hear how it is shown: "It came to pass," it is said, "that he died, and was carried away by the angels." Not the souls of the just only, but also those of sinners are led away. This also is clear from the case of another rich man. For when his land brought forth abundantly, he said within himself, "What shall I do? I will pull down my barns and build greater," (Luke 12:18). Than this state of mind nothing could be more wretched. He did in truth pull down his barns; for secure storehouses are not built with walls of stone; they are "the mouths of the poor." But this man neglecting these, was busy about stone walls. What, however, did God say to him? "Thou fool, this night shall they require thy soul of thee." Mark also this: in one passage it is said that the soul is carried away by angels; in the other, that "they require it;" and in the latter case they lead it away as a prisoner; in the former, they guard and conduct it as a crowned victor. And like as in the arena a combatant, having received many wounds, is drenched with blood; his head being then encircled with a crown, those who stand ready by the spot take him up, and with great applause and praise they bear him home amid shouting and admiration. In this way the angels on that occasion led Lazarus also away. But in the other instance dreadful powers, probably sent for that purpose, required the soul. For it is not of its own accord that the soul departs this life; indeed, it is not able. For if when we travel from one city to another we need guides, much more does the soul stand in want of those who can conduct it, when it is separated from the flesh, and is entering upon the future state of existence. For this reason it often rises up and again sinks down into the depth below; it fears and shivers as it is about to put off the flesh. The consciousness of sin ever pierces us, and chiefly at that hour when we are about to be led hence to the account there to be rendered, and to the awful tribunal. Then, if a man has robbed, if he has been covetous, if he has been haughty, if he has unjustly been any one's enemy, if he has committed any other sin whatsoever, all the load of guilt is brought fresh to light, and being placed before the eye causes mental compunction. And as those who live in prison are always in sorrow and pain, and especially on that day when they are to be led forth, and brought to the place where they are to be tried, and placed at the bar, and hear the voice of the judge within; as they then are full of fear, and seem no better than dead men, so the soul, though it is much pained at the very moment of the sinful act, is much more afflicted when about to be hurried away.