What happens to the soul after death? 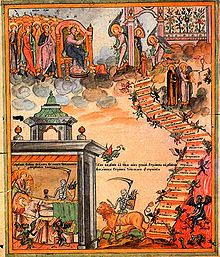 Many western sects believe that the soul is in a state of sleep after Death, and awaiting Judgement Day. Some others believe the soul dies, only to be awakened after Judgement.

This teaching also helps them to reject the saints. They argue that since the departed souls are either “sleeping” or “dead”, we cannot Intercede to them.

St. Paul's admonition in the Bible to intercede to each other, applies only to the “living”(on earth), they say.

Concept of Soul Sleep contradicts Bible.
Most Protestants have recently decided to believe a new teaching that the soul is dormant and inactive till the final Judgement Day.

Ponder over these questions:
They believe that everyone is in “Soul Sleep” till Judgement Day. This is a wrong concept biblically because of the points/questions raised above.

The greatest example of Particular Judgement is that of the Good Thief, who was promised paradise right after death by Jesus Christ.

There are examples in Old Testament too, like that of Enoch and Elijah who were taken upto heaven alive.

If even the Good Thief, who accepted Christ on his dying state, was given an active and alive soul, which resides in Paradise, how much more will Jesus Christ honour his own Mother, His Apostles, the Martyrs and the Saints?

They too will be alive in Paradise. Mother Mary, the Apostles, Saints, Martyrs and the pious Christians.

These 24 elders sitting on the thrones in heaven are the 12 patriarchs of Old Testament and the 12 Apostles of the New.

Day 40.
In most cases, the Particular Judgement is supposed to occur on Day 40.

We, Orthodox, consider the first 40 days after the material death of a person as very important.
We pray for them/conduct eucharist on these points during the 40 days:

The 3rd day (because Jesus ressurected on 3rd day).

The 9th day (because there are 9 classes of angels, and it is the angel that delivers the soul safely to its location and protects it from the devils legions)

The 40th day is very symbolic and important in Christian and Jewish theology. Major Changes and Transformations took place after 40 days:
Also of note:
St. Symeon of Thessalonika writes: “The forty days of prayer are done in memory of the Ascension of the Lord, forty days after His Resurrection, [in hopes] that likewise, the deceased, rising from the tomb and ascending to meet the Lord, might taken be taken up in the clouds, and thus ever be with the Lord.” Novaya Skryzhal’, Part 4, Chapter 472.

In Christ, we dont die.
The Church (to which St. Mary, St. Peter etc belongs) is the BODY of CHRIST.

There is no separation. So just as Christ is alive, we to live.

Christ and Church are compared to:

“Whosoever shall confess that Jesus is the Son of God, God dwelleth in him, and he in God.”–1 John 4:13

So if you say that the Saints, who achieved a high degree of theosis to be grafted onto his body, are dead, then you are saying that Jesus Christ is dead too.

So we can say that some of the Christians (mostly the saints) are in paradise right after death due to particular judgement (as in the case of the Good Thief, Elijah, etc.)

Some maybe in a state of sleep.

Who gets what is upto God alone. We only have the scripture and tradition to give us answers which science cannot provide.

However we Orthodox Christians believe certain Christlike individuals like St. Mary, the Apostles, Saints etc are ones who passed particular judgement like the Good Thief, and like Enoch and Elijah.

We can say conclusively that it is not for nothing that Jesus Christ said thus:

″I tell you the truth, some who are standing here will not taste death before they see the kingdom of God come with power.”–Mark 9:1