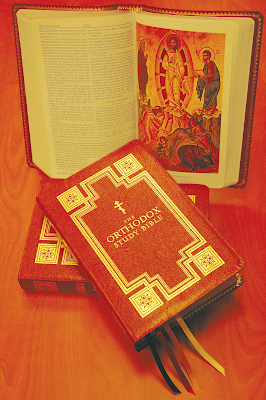 With several new English-language Bible translations that have been published in recent years -- including ones that use gender-neutral and conversational language -- it might be said that Americans are tired of reading the King James-style Bible of yore. But a survey of Bible readers released Friday says that Americans largely prefer literal translations of the books' original Greek and Hebrew texts as opposed to ones that try to convey the intent of the original words.
The survey, conducted by Nashville-based Lifeway Research, found that when Bible readers were asked if they prefer “word-for-word translations, where the original words are translated as exactly as possible,” or “thought-for-thought translations, where the translators attempt to reproduce the intent of the original thought rather than translating the exact words,” 61 percent chose word-for-word.

In order to be part of the survey, the 2,000 readers, who were polled through an online panel that demographically represented the Christian population in the United States, had to already read the Bible at least once a month on their own or as part of a family activity, and not only in a church or worship setting.

“It is interesting to note that Bible sales do not necessarily follow these preferences. Those reading the Bible each month represent only a portion of all Bible purchasers,” said Scott McConnell, director of LifeWay Research, referring to the popularity of new Bible translations that have been selling recently, such as the Common English Bible that was released in July.

The Common English Bible is notable for some of its uncommon language, from calling Jesus "the Human One" instead of the "Son of Man," and calling Adam "human" until Eve appears in Genesis 2:23. At that point, the Bible translation reads: "The human said, This one finally is bone from my bones and flesh from my flesh. She will be called a woman because from a man she was taken.'"

Another new Bible translation, the New American Bible that was released in March by the U.S. Conference of Catholic Bishops, also made several changes. It includes changing the word "booty" to "spoils" of war to avoid a sexual reading, changing "holocaust" to "burnt offering" to avoid unintentionally referencing genocide, changing the 23rd Psalm from "even when I walk through a dark valley" to a "walk through the valley of the shadow of death," and re-translating the title of Proverbs 31:10 from the ode to "The Ideal Wife" to a "Poem of the Woman of Worth."

“Bible readers can share their preferences for different translation principles but may not be aware of which characteristics are present in specific translations -- even the ones that they own," McConnell cautioned. "Without specific instruction, most readers will not notice when a translation moves away from a literal or word-for-word translation.”

Lifeway Research, which is affiliated with the Southern Baptist Convention, found that while regular Bible readers preferred translations that were closer to the original Biblical texts, 68 percent of them also wanted language in Bibles to be simpler to understand, while only 7 percent wanted more difficult-to-understand translations. In addition, 81 percent of respondents said the Bible should be enjoyable to read.

“In the same way drivers want big, powerful, fuel-efficient vehicles, Bible readers want word-for-word translations that are easy to understand,” McConnell said. “As translators try to cross the globe and two millennia, fully accomplishing both is not always possible.”

The survey also asked about the translation of the name used for God. Most Bibles call God by "the LORD" in the Old Testament, but some use what is believed to be the original pronunciation, "Yahweh." Almost eight in 10 Bible readers said they prefer the traditional translation of "the LORD."

Other findings of the survey include the following: