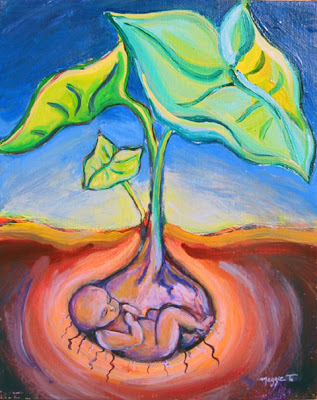 Poi is a Hawaiian word for the primary Polynesian staple food made from the corm of the taro plant (known in Hawaiian as kalo). Poi is produced by mashing the cooked corm (baked or steamed) until it is a highly viscous fluid. Water is added during mashing and again just before eating, to achieve a desired consistency, which can range from liquid to dough-like (poi can be known as two-finger or three-finger, alluding to how many fingers you would have to use to eat it, depending on its consistency).

Poi made from Taro should not be confused with
The bowl of poi was considered such an important and sacred part of daily Hawaiian life that whenever a bowl of poi was uncovered at the family dinner table, it was believed that the spirit of Hāloa, the ancestor of the Hawaiian people, was present. This is because Hawaiians believed that the taro plant, or kalo, was the original ancestor of the Hawaiian people. Because of that, all conflict among family members had to come to an immediate halt.

Shortages in taro production in recent years due to pests and labor shortages have also resulted in shortages and higher prices for poi in Hawaiʻi. At the same time, innovations in poi production have resulted in poi that stays fresh longer and tastes sweeter, but such products generally sell at a premium price and require refrigeration.

Poi has a paste-like texture and a delicate flavor. The flavor changes distinctly once the poi has been made. Fresh poi is sweet and edible all by itself. Each day thereafter the poi loses sweetness and turns slightly sour. Because of this, some non-native Hawaiian people find poi more palatable when it is mixed with milk and/or sugar. The speed of this fermentation process depends upon the bacteria level in the poi. To slow the souring process, poi should be stored in a cool, dark location. Poi stored in the refrigerator should be squeezed out of the bag into a bowl, and a thin layer of water drizzled over the top to keep a crust from forming.

Poi is a natural laxative, so it is best to avoid eating it in large quantities.

Sour poi is still quite edible with salted fish or lomi salmon on the side. Sourness is prevented by freezing or dehydrating, although the resulting poi tends to be bland in comparison with the fresh product. For best thawing results place in a microwave with a layer of tap water over the surface of the frozen poi. Sour poi is also used as a cooking ingredient, usually in breads and rolls. It has a smooth, creamy mouthfeel.

Poi has been used as a milk substitute for babies born with an allergy to dairy products because of its nutritional value. It is also used as a baby food for babies with severe food allergies.