Kyakhta: The Russian source for all the tea in China 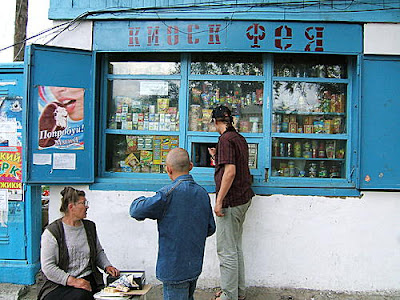 One of the most dramatically picturesque areas in the Russian Federation is located in the Republic of Buryatia along the northern border of Mongolia. The dry, clear air provides endless vistas of plains with sparse cover giving way to rolling hills with pine forests. The area was once dotted with Buddhist monasteries, very few of which still exist in places such as Gusinoe ozero (Goose Lake), itself a remarkable body of cerulean water nestled among the hills.

The main hub of human activity in this area is the town of Kyakhta, for centuries the main border crossing for trade between Russia and China. Located about 150 miles south by road from Buryatia’s capital Ulan-Ude, Kyakhta was originally an aglomeration of three settlements dating from the early 18th century that served to regulate trade and customs between Russia and China. Situated by the small Kyakhta River, the settlement was on the most direct caravan route between the Siberian center of Irkutsk and Beijing. In 1727, work began on the New Trinity Fort, founded by Count Savva Vladislavich-Raguzinsky and named after its Church of the Trinity. Later that year, the Russian and Chinese Empires signed treaties formalizing the border and establishing trade relations. In 1805 the settlement around the fort was designated a town named Troitskosavsk in honor of the two altar dedications of its main church (Trinity and St. Savva).

While the Trinity Fort fulfilled administrative and security functions, trade was handled by the adjacent settlement of Kyakhtinskaya Sloboda (Kyakhta Quarter), also founded in 1727. Here Russian merchants gathered to trade fur, leather, hides and cattle for a variety of Chinese goods, including silk and some porcelain, but with special emphasis on spices such as ginger and rhubarb, which were highly valued for medicinal properties. By the 1760s, Kyakhta Quarter had become the primary border point for trade with China, and the population and prosperity of both Russian settlements increased accordingly. Chinese merchants gathered across the border in a third settlement, known as Maimachin—a generic Chinese term meaning “trading center.”

By the late 18th century, the most significant import by far was tea, which for almost a century Kyakhta provided not only to the enormous Russian market, but also to much of Europe. Some of the buildings constructed to handle the tea trade still stand in various conditions, including the main Merchants’ Court, located near the Resurrection Church. Within its large rectangular courts, bales of Chinese tea were repackaged for shipment west.

During the first century of Kyakhta’s existence, all its structures were built from logs. As the 19th century progressed, however, the log churches were replaced with large masonry churches in a neoclassical style, a move that reflected the town’s increasing prosperity. The most notable of these churches was the Cathedral of the Trinity, begun in 1812 with the support of donations from local merchants and completed in 1817. A major expansion of its refectory in 1870 gave it an appearance that more closely resembled western churches, rather than the typical Russian Orthodox design. Closed during the Soviet period and converted to a museum in 1934, the cathedral was gutted by fire in 1963. Its bare walls still stand as an imposing classical ruin.

Not to be outdone by the reconstruction of the cathedral in Troitskosavsk, in the 1830s, merchants in the Kyakhta trading quarter paid for the construction of an imposing new Church of the Resurrection, built according to a design by the Moscow architect Grigory Gerasimov. With the completion of the church and the dedication of its three altars in 1838, this dusty border town could claim two of the most impressive churches in the Transbaikal region, a tribute to its commercial significance for the China tea trade. And in 1884-1888 the Cemetery Church of the Dormition was constructed to replace an adjacent log church

Perhaps the greatest charm of Kyakhta is its individual houses, which are built primarily of wood. With a minimum of maintenance, they have been relatively well preserved in the area’s dry climate. One of the few large masonry houses in the town belonged in the mid-19th century to the philanthropist Alexei Lushnikov, of a family known not only for its support of culture and philanthropy, but also for hospitality. The many guests to visit the Lushnikov house include the renowned American traveler and author George Kennan.

With the opening of Chinese ports to English ships in the mid 19th century and the subsequent building of the Suez Canal, Kyakhta’s importance to the tea trade waned. Its importance was further diminished by the town’s distance from any rail link. Nonetheless, Kyakhta retained regional importance for trade with northern China.

Like so many Siberian towns, Kyakhta suffered from the savagery of the Russian Civil War. Between 1918 and 1921, the town was fought over by numerous factions, and at the same time played a role in the establishment of Communist forces in Mongolia. As a final blow, the town was attacked in the spring of 1921 by troops led by the notorious Baron Ungern-Sternberg. Although the attack was repulsed by Soviet forces, the fighting in 1921 led to the complete destruction by fire of the once-thriving Chinese settlement of Maimachen.

In 1934, the various settlements were officially designated by the single name of Kyakhta. During the Soviet period, the town shifted roles to administrative and military garrison duties. Today, Kyakhta is a placid border crossing with a population less than 20,000. It has visions of expanding its economy through tourism, including eco-tourism to Mongolia. In this role, perhaps its greatest blessing is to have been bypassed by development, still appearing much as it did when it was the departure point for “all the tea in China.”