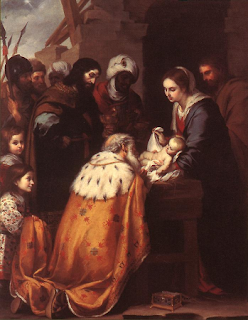 A mix of Christian Buddhist even Hindu traditions say these kings came from the "East" while the gospels say the "Orient". One Indian tradition claims they were Buddhist! Mixed traditions say they were looking for a transmigrated soul or bodhisattva - which many believe they DID find.

In Christian tradition the Magi, also known as the Three Wise Men, The Three Kings, or Kings from the east - although it is not said in the Bible how many Magi there really were - are sometimes considered to be Median, perhaps Iranian Zoroastrian priests, who were also proficient in astrology from Ancient Persia. The Gospel of Matthew states that they came "from the east to Jerusalem" to worship the Christ, "born King of the Jews". According to Matthew, they navigated by following a star which came to be known as the Star of Bethlehem. As they approached Jerusalem, Herod tried to trick them into revealing where Jesus was, so that he might be put to death. Upon finding Jesus, the Magi gave him an unspecified number of gifts, amongst which were three highly symbolic ones: gold, frankincense and myrrh. Because these three gifts were recorded, it is traditionally said to have been three givers; however, Matthew does not specify how many wise men came from the east.

The Magi were then warned in dreams that revealed Herod's deadly intentions for the child and decided to return home by a different route, in order to thwart them. This prompted Herod to resort to killing all the young children in Bethlehem, an act called the Massacre of the Innocents, in an attempt to eliminate a rival heir to his throne. Jesus and his family had, however, escaped to Egypt beforehand. After these events, the magi return home and passed into obscurity.[1] The story of the nativity in Matthew glorifies Jesus, likens him to Moses, and shows his life as fulfilling prophecy.

Three leaders of the Chinese Christian Church[3] cite an alternate proposal for the origin of one of the Magi. They state that many Chinese Christians believe at least one of the Magi came from China. They cite anecdotal evidence about Liu Shang, the chief astrologer during the Han dynasty in China at the time that Jesus was born. Liu Shang discovered a new star the Chinese called the "king star" - which was associated with the birth of a new king. The disappearance of Liu Shang from China's imperial court for two years shortly after this star was discovered, they interpret as perhaps traveling the Silk Road to Bethlehem.