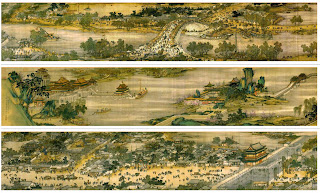 Tomb Sweeping Day and Clear Brightness Festival are the most common English translations of Qingming Festival. Tomb Sweeping Day is used in several English language newspapers published in the Republic of China.

For the Chinese, it is a day to remember and honour one's ancestors at grave sites. Young and old pray before the ancestors, sweep the tombs and offer food, tea, wine, chopsticks, (joss) paper accessories, and/or libation to the ancestors. The rites are very important to most Chinese and especially farmers. Some people carry willow branches with them on Qingming, or put willow branches on their gates and/or front doors. They think that willow branches help ward off the evil ghosts that wander on Qingming. Also on Qingming, people go on family outings, start the spring plowing, sing, dance, and Qingming is a time where young couples start courting. Another popular thing to do is fly kites (in shapes of animals, or characters from Chinese opera).

Hanshi, the day before Qingming, was created by Chong'er, the Duke Wen of the state of Jin during the Spring and Autumn Period when he accidentally killed his personal friend and servant Jie Zhitui (介之推) (or Jie Zitui) and his mother in a fireblaze in the hope of making him return to him (Chong'er). On Hanshi, people were not allowed to use fires to heat up food, thus nicknaming it the Cold Food Festival. Eventually, 300 years ago, the Hanshi "celebration" was combined with the Qingming festival, but later abandoned by most people.

Qingming itself was created by the Tang Emperor Xuanzong in 732. It is said that because the wealthy held too many expensive, elaborate ancestor-worshipping ceremonies, in a needed effort to lower this expense, Emperor Xuanzong declared that respects could be formally paid at ancestor's graves only on Qingming.
at 12:01