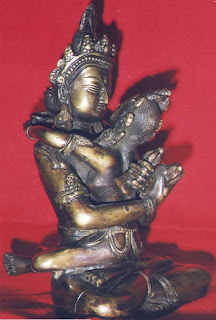 The Christian understanding is that love comes from God. The love of man and woman, eros in Greek, and the unselfish love of others, agape, are often contrasted as 'ascending' and 'descending' love, respectively, but are ultimately the same thing.

There are several Greek words for Love that are regularly referred to in Christian circles.
Christians believe that to love God with all your heart, mind, and strength and Love your neighbor as yourself are the two most important things in life (the greatest commandment of the Jewish Torah, according to Jesus - c.f. Gospel of Mark chapter 12, verses 28-34). Saint Augustine summarized this when he wrote "Love God, and do as thou wilt".

Saint Paul glorified love as the most important virtue of all. Describing love in the famous poem in 1 Corinthians he wrote, "Love is patient, love is kind. It does not envy, it does not boast, it is not proud. It is not rude, it is not self-seeking, it is not easily angered, it keeps no record of wrongs. Love does not delight in evil but rejoices with the truth. It always protects, always trusts, always hopes, and always perseveres." - 1 Cor. 13:4-7 (NIV)

Saint John wrote "Dear friends, let us love one another for love comes from God. Everyone who loves has been born of God and knows God. Whoever does not love does not know God, because God is love." - 1 John 4:7-8 (NIV)

John the Apostle wrote, "For God so loved the world that he gave his one and only Son, that whoever believes in him shall not perish but have eternal life. For God did not send his Son into the world to condemn the world, but the save the world through him." (NIV John 3:16-18)

Christian theologians see God as the source of love, which is mirrored in humans and their own loving relationships.

In Buddhism, Kāma is sensuous, sexual love. It is often an obstacle on the path to enlightenment, since it is selfish.

Karuṇā is compassion and mercy, which reduces the suffering of others. It is complementary to wisdom, and is necessary for enlightenment.

Adveṣa and maitrī are benevolent love. This love is unconditional and requires considerable self-acceptance. This is quite different from the ordinary love, which is usually about attachment and sex, which rarely occur without self-interest. Instead, in Buddhism it refers to detachment and unselfish interest in others' welfare.

In Hinduism kāma is pleasurable, sexual love, personified by the god Kama. For many Hindu schools it is the third end in life (artha).

In contrast to kāma, prema or prem refers to elevated love. However, the term bhakti is used to mean the higher, divine love.

Karuna is compassion and mercy, which reduces the suffering of others.

Bhakti is a Sanskrit term from Hinduism meaning 'loving devotion to the supreme God'. A person who practices bhakti is called bhakta. Hindu writers, theologians, and philosophers have distinguished nine forms of devotion that they call bhakti, for example in the Bhagavatha-Purana and according to Tulsidas. The booklet Narada bhakti sutra written by an unknown author distinguishes eleven forms of love.

In a sense, love does encompass the Islamic view of life as universal brotherhood which applies to all who hold the faith. There are no direct references stating that God is love, but amongst the 99 names of God (Allah), there is the name Al-Wadud or 'the Loving One', which is found in Surah 11:90 as well as Surah 85:14. It refers to God as being "full of loving kindness". In Islam, love is more often than not used as an incentive for sinners to aspire to be as worthy of God's love as they may. One still has God's love, but how the person evaluates his own worth is to his own and God's own counsel. All who hold the faith have God's love, but to what degree or effort he has pleased God depends on the individual itself.

Ishq, or divine love, is the emphasis of Sufism. Sufis believe that love is a projection of the essence of God to the universe. God desires to recognize beauty, and as if one looks at a mirror to see oneself, God "looks" at itself within the dynamics of nature. Since everything is a reflection of God, the school of Sufism practices to see the beauty inside the apparently ugly. Sufism is often referred to as the religion of Love. God in Sufism is referred to in three main terms which are the Lover, Loved, and Beloved with the last of these terms being often seen in Sufi poetry. A common viewpoint of Sufism is that through Love humankind can get back to its inherent purity and grace. The saints of Sufism are infamous for being "drunk" due to their Love of God hence the constant reference to wine in Sufi poetry and music.

In Hebrew Ahava is the most commonly-used term for both interpersonal love and love of God. Other related but dissimilar terms are Chen (grace) and Hesed, which basically combines the meaning of "affection" and "compassion" and is sometimes rendered in English as "loving-kindness".

Judaism employs a wide definition of love, both between people and between man and the Deity. As for the former, the Torah states: "Love your neighbor like yourself" (Leviticus 19:18). As for the latter, one is commanded to love God "with all your heart, with all your soul and with all your might" (Deuteronomy 6:5), taken by the Mishnah (a central text of the Jewish oral law) to refer to good deeds, willingness to sacrifice one's life rather than commit certain serious transgressions, willingness to sacrifice all one's possessions and being grateful to the Lord despite adversity (tractate Berachoth 9:5). Rabbinic literature differs how this love can be developed, e.g. by contemplating Divine deeds or witnessing the marvels of nature.

As for love between marital partners, this is deemed an essential ingredient to life: "See life with the wife you love" (Ecclesiastes 9:9). The Biblical book Song of Songs is considered a romantically-phrased metaphor of love between God and his people, but in its plain reading reads like a love song.

The 20th century Rabbi Eliyahu Eliezer Dessler is frequently quoted as defining love from the Jewish point-of-view as "giving without expecting to take" (from his Michtav me-Eliyahu, vol. 1). Romantic love per se has few echoes in Jewish literature, although the Medieval Rabbi Judah Halevi wrote romantic poetry in Arabic in his younger years (he appears to have regretted this later).
at 00:03