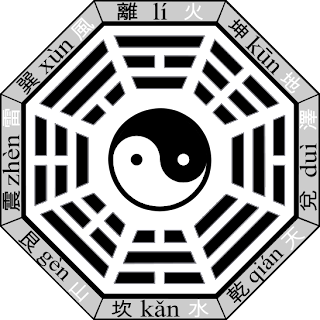 Two diagrams known as bagua (or pa kua) loom large in feng shui, and both predate their mentions in the Yijing or I Ching. The Lo (River) Chart (Luoshu, or Later Heaven Sequence) and the River Chart (Hetu, or Early Heaven Sequence) are linked to astronomical events of the sixth millennium BCE, and with the Turtle Calendar from the time of Yao. The Turtle Calendar of Yao (found in the Yaodian section of the Shangshu or 'Book of Documents') dates to 2300 BCE, plus or minus 250 years.

It seems clear from many sources that time, in the form of astronomy and calendars, is at the heart of feng shui.

In Yaodian, the cardinal directions are determined by the marker-stars of the mega-constellations known as the Four Celestial Animals.
The bagua diagrams are also linked with the sifang (four directions) method of divination used during the Shang dynasty. The sifang is much older, however. It was used at Niuheliang, and figured large in Hongshan culture's astronomy. And it is this area of China that is linked to Huangdi, the Yellow Emperor, who allegedly invented the south-pointing spoon.

You are absolutely right, all true feng shui is based on the constellations as you have mentioned, and also on the positions of Saturn and Jupiter, both in the sky (i.e. where in the zodiac they are) and in relation to each other.

Conjunctions and oppositions of these two planets are at the heart of some feng shui systems like Flying Star, and also are important in Chinese Four Pillar Astrology.