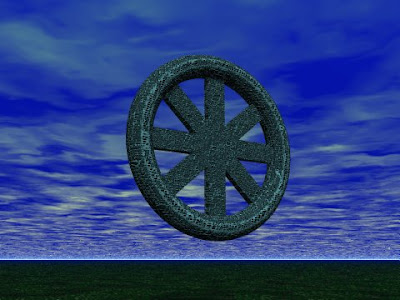 Buddhism, one of China's most venerable religions, has been flourishing as China has witnessed the world's fastest annual economic growth, said Buddhist monks attending the First World Buddhist Forum.

"Buddhism gets prosperous only when the economy develops. It's been the case since ancient times," said Master Hubalongzhuang, vice-president of the Buddhist Association of China (BAC).

Master Mingsheng, also vice-president of the BAC, is glad to enjoy the conveniences brought about by rapid technological progress in the country.

"It used to take us three days to go from one temple to another, but now we can visit three in a day by car. Modern technology helps us in preaching Buddhism," he said.

In TV series, Chinese monks are usually pictured in the traditional way of wearing a grey or yellow robe with a bowl in hand and parcel on the back. But in reality, they use cell phones and digital cameras and surf the Internet to follow the latest developments in the world.

"If modernization is a tide, we are just like a boat. We have to ride over the right direction and know what should be or not be done," said Master Yongxin of the world-famous Shaolin Temple.

"Only in this way can we stand ready over the tide instead of being washed away like fish," he added.

In the 1980s, a movie called "Shaolin Temple" swept the country and parts of Asia, making the temple "Mekka" for kungfu lovers. With the Internet coming, Shaolin has become a "symbol of Chinese culture," said Yongxin.

"Promoting Shaolin culture through TV, movie, the Internet and publications is a good way to carry forward Buddhist traditions and have an influence over the general public," he said.

It was broadcast live by China's national TV station. Simultaneous interpretation by means of high-tech devices helped monks from 37 countries and regions with different languages understand each other during discussions. Their speeches and articles were uploaded online.

The monks moved to Putuoshan, an islet in east China known as "a Buddhist kingdom on the sea," where they held a lantern transmission ceremony to pray for world peace, a pageant that instantly became an online hit.

An Husheng, who runs a website on Buddhism, said the Internet offers the most effective channel for spreading Buddhist teachings and makes public participation in Buddhist practice a reality.

"The era of online Buddhism has come," he said.

More than 1,000 Buddhist monks, experts and politicians from 37 countries and regions attended the forum to discuss how to build up a harmonious world. The forum is the first of its kind in China in more than 2,000 years when Buddhism was introduced from ancient India.
at 08:22