TaiJiQuan and GongFu: Taoism and Buddhism 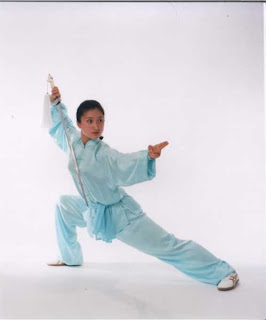 The principles and philosophies that go into the make-up of Tai Chi can be traced back thousands of years; however, the Tai Chi meditation form that is seen on these web pages is a (relatively) modern diversification from its combat 'parent' Tai Chi Chuan, which is in turn itself a form of Kung Fu. The stances and moves in Tai Chi have symbolic meaning, but they are also derived from real combat techniques and applications from Kung Fu. The term 'Kung Fu', literally meaning 'the effort of a man', is a general term for a type of Chinese martial arts, and is made up of many different combat forms. It is also known as Chinese Boxing, which is seen more as an excersise - In China it is often called 'wu-shu', which is the more martial side. There are two main types of Kung Fu: the external form (wai-chia) is the classic system seen and popularised in the West and is rigorous and agressively outward - hard, and places emphasis on force and strength. The Internal system (nei-chia) is very different: it's philosophies use excersise and chi kung-type stillness for both spiritual means and as a means for self defence - soft, yielding and inward. Tai Chi Chuan and other forms such as Hsing-I and Paqua come under this internal system.

Tai Chi Chuan can be traced back to the beginnings of recorded Taoist history in one form or another, but became what we might now recognise, with the development of Kung Fu. The origins of Kung Fu are rooted in the earliest development of martial arts, and the internal or soft schools had their birth during the Han Dynasty (202BC - 220AD) when Taoist meditation techniques were used in excersise sequences. These were based upon five animals: bear, deer, monkey, tiger and bird, and were incorporated into fighting and self defense during particularly violent periods of China's history. Later, these forms benefitted from the addition of Buddhist philosophies that were based upon the concepts of equilibrium between the five elements of air, earth, fire, water and metal.

As described elsewhere on this web site, legend has it that the Indian monk Bodhidharma during the sixth century settled at the Shaolin temple, and saw that the monks there were unfit and sickly because of their strict ascetic regime, so he created a set of excersises to accompany daily prayers (The Eighteen Hands of Lo-Han); which turned out to be useful during fighting, and so formed the basis of external 'Kung Fu'. By the 1600's these excersises had been expanded to over 170 moves. During the tenth century the kung fu techniques were known only to the Buddhist monks - and kept in great secrecy; however they then expanded to the Taoist monasteries, who had developed their own martials arts independently. To the Taoists, these new techniques were considered too aggressive, and were incorporated into their contemporary internal defensive practices to produce the beginnings of the modern internal Kung Fu schools..

Taoist philosophy features prominently in Kung Fu: the concepts of yin and yang and the lifeforce of chi are used within the excersises to maintain the equilibrium of yin (inwards) and yang (outwards) by allowing the ch'i to flow properly throughout the body. Both types of Kung Fu use Zen Buddhism principles too, focusing the ch'i to produce great strength. The internal forms especially use yin and yang to form strength (yang) and weakness (yin) - weakness can be seen as 'yielding', and in Tai Chi Chuan and Paqua yielding is used to enormous effect to overpower an anatgonist. Tai Chi uses the principle of chi energy flowing correctly through the body to gain (like other Kung Fu forms) strength, stamina, flexibility, etc. but particularly to promote deep relaxation and release of the nervous system, and so has developed into a non-combative meditation form of the Tai Chi Chuan Kung Fu martial art.
at 11:24