Who is Saint Valentine and why do we exchange gifts? 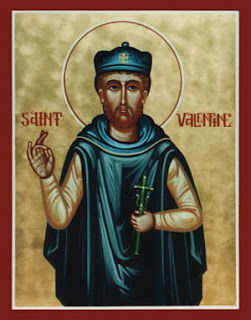 Every February 14, couples send flowers, buy chocolate and break out their romantic sides. Few people, however, know how we came to celebrate Valentine’s Day. They may even believe the holiday was invented by the flower and greeting card industry. In fact, a history of Valentine’s Day through the years recounts many mysteries, romantic figures, and smart entrepreneurs.

One legend suggests Valentine was a priest in the third century in Rome when Emperor Claudius II outlawed marriage for young men because he thought single men made better soldiers than men with wives and families. Valentine secretly continued to perform marriages and when his actions were discovered, Claudius sentenced him to death. He suffered martyrdom on the 14th day of February, about the year 270.

Another story has it that while in prison, Valentine fell in love with a young girl who visited him during his confinement and who may have been his jailor's daughter. The future saint cured the girl of her blindness and before his death, he allegedly wrote his love a letter, signing it 'From your Valentine,' an expression still common today.

We may owe our observance of Valentine's Day to the Roman celebration of Lupercalia, a festival that honored Juno Februata, the goddess of "feverish" love. Annually, on February 15th, young men and women would draw names to partner with for romantic game playing. Early Christians frowned on these lascivious activities and tried to transform the sexual nature of Lupercalia by turning the "feast of the flesh" into a "ritual for romance.” The Church selected a single saint, St. Valentine, to represent the new festival. Since Valentine was martyred on February 14, the date was also changed. When the names were now drawn on this day, couples began to exchange small gifts.

One of the earliest known “valentine” cards dates back to 1415. From his confinement in the Tower of London after the Battle of Agincourt, a young Frenchman, Charles, Duke of Orleans, sent several poems or rhymed love letters to his wife in France. One valentine card showed a drawing of a knight and a lady, with Cupid in the act of sending an arrow to pierce the knight's heart.

The holiday that honors lovebirds has not always been so popular, going in and out of favor throughout the centuries. The celebration experienced renewed vigor in England just prior to 1800 when publishing companies came to the aid of tongue-tied romeos by distributing booklets of passages that lovers could recite to each other. Gift giving included cards that were usually hand painted and often lavishly decorated with laces, silk or satin, flowers (made from the feathers of tropical birds), and perfumed sachets.

The first U.S. made valentines were fashioned by a Mount Holyoke College student, Esther Howland circa 1830. Her father imported valentines every year from England as a stationer in Worcester, MA. Esther decided to create her own valentine messages and began importing lace, fine papers, and other supplies for her cards. Her "Worcester" valentines sold an estimated hundred thousand dollars annually! Until the mid-1800's, the cost to send a Valentine through the mail was beyond the means of the average person. The postal service even demanded payment from the recipient, not the sender, of the letter! A hand delivered Valentine became the most popular way to declare love during this time.

The holiday suffered a popularity plunge in the late 19th century, but by the 20th century, Americans businesses had rescued Valentine's Day by turning it into a commercial bonanza. It became common for a valentine to usually accompany a more elaborate gift of candy, flowers, dinner, etc. Nowadays, many schools even enable students to send flowers to each other to celebrate the day. Valentine’s Day cards have emerged to become the second biggest sellers to Christmas cards. Recently, the internet has proved increasingly popular to celebrate the day as well. Now you can send an electronic greeting card, send chocolate and send flowers all without leaving the house!
at 02:22