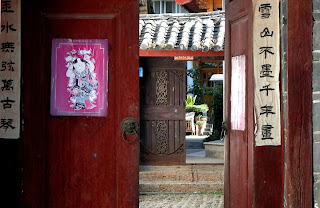 The lunisolar Chinese calendar determines Chinese New Year dates. The calendar is also used in countries that have adopted or have been influenced by Han culture (notably the Koreans, Japanese and Vietnamese) and may have a common ancestry with the similar New Years festivals outside East Asia (such as Iran, and historically, the Bulgars lands).

Chinese New Year starts on the first day of the new year containing a new moon (some sources include New Year's Eve) and ends on the Lantern Festival fourteen days later. This occurs around the time of the full moon as each lunation is about 29.53 days in duration. In the Gregorian calendar, Chinese New Year falls on different dates each year, a date between January 21 and February 20. This means that the holiday usually falls on the second (very rarely third) new moon after the winter solstice. In traditional Chinese Culture, lichun is a solar term marking the start of spring, which occurs about February 4.

The dates for the Spring Festival from 1996 to 2019 (in the Gregorian calendar) are at the right, along with the year's presiding animal zodiac and its earthly branch. The names of the earthly branches have no English counterparts and are not the Chinese translations of the animals. Alongside the 12-year cycle of the animal zodiac there is a 10-year cycle of heavenly stems. Each of the ten heavenly stems is associated with one of the five elements of Chinese astrology, namely: Wood, Fire, Earth, Metal, and Water. The elements are rotated every two years while a yin and yang association alternates every year. The elements are thus distinguished: Yang Wood, Yin Wood, Yang Fire, Yin Fire, etc. These produce a combined cycle that repeats every 60 years. For example, the year of the Yang Fire Rat occurred in 1936 and in 1996, 60 years apart.

Many online Chinese Sign calculators do not account for the non-alignment of the two calendars, incorrectly using Gregorian-calendar years rather than official Chinese New Year dates.
at 07:48

I've seen the "year confusion" when people read about their "Chinese Sign" on the placemats that you see in some Chinese restaurants.

My poor spouse, who was born on 1/23/64, was so disappointed to learn that he was a Rabbit instead of a Dragon! ;)