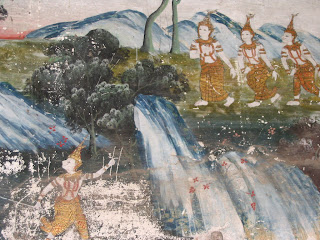 While there are abundant and varied sources for conceptions of Heaven, the typical believer's view appears to depend largely on his religious tradition and particular sect. Some religions conceptualize Heaven as pertaining to some type of peaceful life after death related to the immortality of the soul. Heaven is generally construed as a place of happiness, sometimes eternal happiness. A psychological reading of sacred religious texts across cultures and throughout history would describe it as a term signifying a state of "full aliveness" or wholeness.

Some Eastern religions and some Western traditions believe in reincarnation and moksha (liberation) instead of Heaven, but some still include a concept of Heaven similar (but not necessarily the same) as the concept held by Christianity. For example, in Buddhism there are several heavens, all of which are still part of Samsara (illusionary reality). Those who accumulate good karma may be reborn in one of them. However, their stay in the heaven is not eternal—eventually they will use up their good karma and will undergo a different rebirth into another realm, as humans, animals, or other beings. Because Heaven is temporary and part of Samsara, Buddhists focus more on escaping the cycle of rebirth and reaching enlightenment (Bodhi). In the native Chinese Confucian traditions Heaven (Tian) is an important concept, where the ancestors reside and from which emperors drew their mandate to rule in their dynastic propaganda, for example. In Hindu belief, likewise, heaven—called Swarga loka—is seen as a transitory place for souls who did good deeds but whose actions are not enough for moksha or merging (union) with Brahman.

In ancient Judaism, the belief in Heaven and afterlife was connected with that of Sheol (mentioned in Isaiah 38:18, Psalms 6:5 and Job 7:7-10). In Christianity, heaven is either an eternally blessed life after death or a return to the pre-fallen state of humanity, a second and new Garden of Eden, in which humanity is reunited with God in a perfect and natural state of eternal existence and generally they believe this afterdeath reunion is accomplished through faith that Jesus Christ died for the sins of humanity on the cross, was resurrected and "bodily" ascended into heaven.

Historically, Christianity has taught "Heaven" as a generalized concept, a place of eternal life, in that it is a shared plane to be attained by all the pious and elect (rather than an abstract experience related to individual concepts of the ideal).

In the 2nd century CE, Irenaeus (a Greek bishop) wrote that not all who are saved would merit an abode in heaven itself. In Against Heresies, he wrote that only those deemed worthy would inherit a home in heaven, while others would enjoy paradise, and the rest live in the restored Jerusalem.

The Christian Church has been divided over how people gain this eternal life. From the 16th to the late 19th century, Christendom was divided between the Roman Catholic view, the Orthodox view, the Coptic view, the Jacobite view, the Abyssinian view and Protestant views.

Roman Catholics believe that entering Purgatory after death (physical rather than ego death) cleanses one of sin (period of suffering until one's nature is perfected), which makes one acceptable to enter heaven. This is valid for venial sin only, as mortal sins can be forgiven only through the act of reconciliation and repentance while on earth.[citation needed] Some within the Anglican Church also hold to this belief, despite their separate history. However, in Oriental Orthodox Churches, it is only God who has the final say on who enters heaven. In the Eastern Orthodox Church, heaven is understood as union and communion with the Triune God (reunion of Father and Son through love). Thus, Heaven is experienced by the Orthodox both as a reality inaugurated, anticipated and present here and now in the divine-human organism of the Christ's Body, the Church, and also as something to be perfected in the future.

In some Protestant Christian sects, eternal life depends upon the sinner receiving God's grace (unearned and undeserved blessing stemming from God's love) through faith in Jesus' death for their sins, his resurrection as the Christ, and accepting his Lordship (authority and guidance) over their lives. In other sects the process may or may not include a physical baptism, or obligatory process of transformation or experience of spiritual rebirth

In Hinduism, with its emphasis on reincarnation, the concept of Heaven is not as prominent. While heaven is temporary (until the next birth), the permanent state that Hindus aspire to is Moksha. Moksha is seen as the soul's liberation from the cycle of life and death, a re-establishment in one's own fundamental divine nature and may include union with or joining God.

Entry into heaven (swarga loka) or hell (Naraka) is decided by the Lord of death Yama and his karmic accountant, Chitragupta, who records the good and bad deeds of a person during his lifetime. It must be noted that Yama and Chitragupta are subordinate to the supreme Lord Ishwara (God) and work under his direction. Entry into heaven is only dependent on ones actions in the previous life and is not restricted by faith or religion. The ruler of heaven, where one enjoys the fruits of ones good deeds, is known as Indra and life in that realm is said to include interaction with many celestial beings (gandharvas).

According to Buddhist Cosmology the universe is undergoing cycles and beings are spread over a number of existential "planes" in which this human world is only one (though important) "realm" of life.

In Buddhism the gods are not immortal, though they may live much longer than the earthly beings. They also are subject to decay and change, and the process of becoming. The intensity and the manner in which these processes take place however may be different and involve longer periods of time. But like any other beings, they are with a beginning and an end.

However, all heavenly beings are regarded as inferior in status to the Arhats who have attained Nirvana. The gods were also from the lower worlds originally, but slowly and gradually graduated themselves into higher worlds by virtue of their past deeds and cultivation of virtuous qualities. Since there are many heavens and higher worlds of Brahma, these gods may evolve progressively from one heaven to another through their merit or descend into lower worlds due to some misfortune or right intention. One notable Buddhist paradise is the Pure Land of Pure Land Buddhism.

The gods of Buddhism are therefore not immortal. Neither their position in the heavens is permanent. They may however live for longer durations of time. One of the Buddhist Sutras states that a hundred years of our existence is equal to one day and one night in the world of the thirty three gods. Thirty such days add up to their one month. Twelve such months become their one year, while they live for a thousand such years.
at 00:07