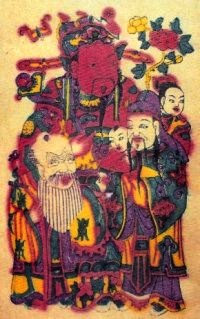 Cai Shen (traditional Chinese: 財神; simplified Chinese: 财神; pinyin: Cáishén) also called (Wade-Giles romanization) Ts'ai Po Hsing Chün, is the Chinese god of prosperity. He can be referred to as Zhao Gongming or Bi Gan. Though Cai Shen started as a Chinese folk hero, later deified and venerated by local followers and admirers, Taoism and Pure Land Buddhism also came to venerate him as a god.

Cai Shen's name is often invoked during the Chinese New Year celebrations. He is often depicted riding a black Tiger and holding a golden rod. He may also be depicted armed with any one of several iron weapons. During the two-week New Year celebration, incense is burned in Ts'ai Shen's temple (especially on the fifth day of the first lunar month), and friends joyously exchange the traditional New Year greeting “May you become rich” (“Kung hsi fa ts'ai”).

The Ming-dynasty novel Feng Shen Yen I relates that when a hermit, Chao Kung-ming, employed magic to support the collapsing Shang dynasty (12th century BC), Chiang Tzu-ya, a supporter of the subsequent Chou-dynasty clan, made a straw effigy of Chao and, after 20 days of incantations, shot an arrow made of peach-tree wood through the heart of the image. At that moment Chao became ill and died. Later, during a visit to the temple of Yüan Shih, Chiang was rebuked for causing the death of a virtuous man. He carried the corpse, as ordered, into the temple, apologized for his misdeed, extolled Chao's virtues, and in the name of that Taoist god canonized Chao as Ts'ai Shen, god of wealth, and proclaimed him president of the Ministry of Wealth. (Some accounts reverse the dynastic loyalties of Chao and Chiang.)

Another account identifies Ts'ai Shen as Pi Kan, put to death by order of Chou Hsin, last Shang emperor, who was enraged that a relative should criticize his dissolute life. Chou Hsin is said to have exclaimed that he now had a chance to verify the rumour that every sage has seven openings in his heart.

This is the end of my short series on the Chinese New Year or Spring Festival. When I return to this blog after a short New Year's break with my family, I shall return to the main focus of comparing Eastern Religions and Philosophies such as Buddhism, Taoism, Confucianism, and Hinduism to the Western Religions of Christianity, Judaism, Islam, and Zoroastrianism.