The 1907 Catholic Encyclopedia admits that "Saint Josaphat" is really Buddha! 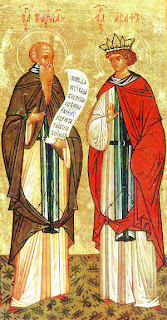 The story is a Christianized version of one of the legends of Buddha, as even the name Josaphat would seem to show. This is said to be a corruption of the original Joasaph, which is again corrupted from the middle Persian Budasif (Budsaif=Bodhisattva). Still it is of historical value, since it contains the "Apology" presented by the Athenian philosopher Aristides to the Emperor Adrian (or Antoninus Pius). The Greek text of the legend, written probably by a monk of the Sabbas monastery near Jerusalem at the beginning of the seventh century, was first published by Boissonade in "Anecdota Graeca" (Paris, 1832), IV, and is reproduced in Migne, P.G., XCVI, among the works of St. John Damascene. The legend cannot, however, have been a work of the great Damascene, as was proved by Zotenberg in "Notices sur le livre de Barlaam et Josaphat" (Paris, 1886) and by Hammel in "Verhandl. des 7 interneat. Orientalisten Congresses", Semit. Section (Vienna, 1888).
at 02:38