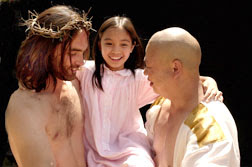 Edward Conze, a leading expositor of Buddhism to the twentieth-century western world, has pointed to a number of similarities between Mahayana Buddhism and the Gnosticism of the early Christian centuries. And others have found resemblances. One is the special emphasis on Wisdom. There may indeed be a central core of meaning shared by the relevant Sanskrit, Semitic, Greek, and Latin terms -- as a reference to "wisdom," "mind," "awareness," "consciousness," different from mere intellect or rationality.

All the words intended to be descriptive of Wisdom are, like "Wisdom" itself, elusive in meaning and variously nuanced. They concern questions which neither science nor philosophy nor theology can precisely phrase, let alone precisely answer. By itself the similarity in nomenclature of central ideas does not necessarily prove geographic connectedness. It is striking, however, that a particular Wisdom theme and mystical systems associated with it arose just beyond both borders of Iran in the same period. In both, "knowledge" as an intuitive revelation (Greek gnosis , Sanskrit jnana) is the key to salvation.

In both Gnosticism and Buddhism, the opposite of gnosis or consciousness is ignorance, the root evil. Drunkenness, blindness, poverty, deficiency, emptiness, were favorite Gnostic metaphors for the un-knowing state of humankind. Western thinkers and clerics almost universally deplore what they regard as the "negativism" of Gnosticism and Buddhism. The Greco-Judaic-Christian model does indeed take a more optimistic view of human possibilities: God is Good; God created this world for human beings to enjoy; and when their brief lives are ended, they will, if worthy, be rewarded in perpetuity. Buddhists speak of this life as being suffused with dukka , which is usually translated as "suffering." The Pali or Sanskrit word would perhaps mean more to the Western mind if it were seen to include such notions as incompleteness, unsatisfactoriness, frustration, anxiety.

To ignore this fundamental element of being is, in the Buddhist and Gnostic view , to be escapist and evasive of truth. For the Buddhist, dukka results from the passions of craving and its opposite, hate and aversion. Hope for escape lies in overcoming the physical and mental and emotional distractions of this life and a return to a state free of differentiations. Gnostics likewise aspired to a Return to a state of unity, beyond the reach of those entangled in this unsatisfactory world's concerns.

In both Indian and the Middle Eastern systems, there are different levels of spiritual attainment. Some Gnostics, like the Valentinians (and eventually Northern Buddhists, after about A.D.200). thought of three levels of human existence: the highly spiritually aware, destined for salvation; those blind to truth and given to self-deception who are destined for perdition; and those whose destiny is not fixed, who are open to the possibility of salvation. Mahayana, however, resisted the thought that anyone was hopelessly beyond the pale.

There are many other pointers toward mutual influence across the broad belt of Aramaic-speaking lands between the Euphrates and the Indus -- and other lands further east, along the Ganges. We have already noted the vigorous trade between the Mediterranean world and India, in part a sea trade but also commerce by caravan routes across Syria, Mesopotamia, Iran, and Afghanistan, connecting with the silk road into China. Not only fabrics and gems but also writings held to be sacred traveled these highways of commerce. Merchants and missionaries are usually found together. Manicheans were famous as traders in the East. Hippolytus, as we have seen, wrote of a Scythianus who, before Mani, had brought the doctrine of the Two Principles from India. Also in the fourth century, Ephraim had attacked Mani for letting himself be overcome by "the Lie" from India, introducing "two powers which were against each other."

There are unmistakable signs of Roman connections after the Kushans took over from the Parthians of Gundaphorus's time in the middle of the first century. Caches of Roman coins have been found in the Punjab as in southern India, although not on as large a scale. The Kushans themselves began making coins on the Roman model.

The early Christian centuries saw a flowering of Buddhist sculpture in the Kushan empire, in stone and gesso figures. In the northwest region of Gandhara the sculpture is much more distinctively Greco-Roman than Indian. The Buddha's soul-twin, Vajrapani, appearing as a naked Heracles leaning on his club (the thunderbolt), is one example. For the first time, the Buddha himself is depicted in sculpture, dressed in Roman robes, quite unlike those appearing further East along the Ganges. The techniques (and perhaps even the materials) of Kushan gesso work, involving the use of gypsum like that found in ample deposits west of Alexandria, were apparently brought by artisans from the Mediterranean world.

Early Western students of Buddhist art tended to think that the obvious Hellenistic aspects of Kushan sculpture in the Gandhara region derived directly from the conquests of Alexander the Great late in the fourth century B.C. Before the Kushans, however, any surviving traces of Greek influence on the region's art and coinage appear weak and crude. Later scholars have persuasively argued (and a discerning eye will confirm) that the Hellenistic features, especially sharply defined and naturalistic human figures and distinctive treatment of garment-folds, derived from a fresh infusion directly from the Roman world in the first two centuries. A.D.

There are other suggestive conjunctions. A visit to "India" (the Buddhist Northwest of the subcontinent) conferred a cachet on holy men, historic or legendary, among Christians and others in the Middle East. "Judas Thomas," Bardaisan, Apollonius of Tyana, and Mani were among the saintly travelers. At the age of 39 the third-century Neoplatonist Plotinus wanted to explore the thought of Persia and India. He got as far as Mesopotamia with the forces of Emperor Gordian, who was planning to invade Persia.

Plotinus had to flee to Antioch when the emperor was killed and the Roman expedition collapsed, and then he went on to Rome.

Clement of Alexandria was aware of Buddhism, praising in his Miscellanies the "Samanaeans" [from sramanas = wanderers] of Bactria for shedding the light of their philosophy "over the nations," and noting that some of the Indians also "obey the precepts of the Boutta, whom on account of his extraordinary sanctity they have raised to divine honors." Clement quoted well-known Greek historians as authority for these observations.

As we have earlier noted, the Mediterranean world had been fascinated by the philosophers of India as far back as Alexander's time (tending to confuse, as Clement sometimes did, Buddhist and Brahmin holy men, who were not naked, with Jains, who were). Dion the Golden-Mouthed was not the only educated Greek-speaker of his time to see the Indians as a people wiser than his audiences. A twentieth-century French explorer of the lore of the Thrice-Greatest Hermes (a non-Christian Gnostic system originating in Egypt) remarks -- with the note of disparagement that marks much Western scholarship -- that "the Oriental mirage had always seduced the imagination of Greece." In the first centuries of the Christian era, he says, minds weary of Greek rationalism embraced the foreign viewpoint. The barbarians were held to "have purer and more basic notions concerning the Divinity -- not because they made better use of reason than the Hellenes, but, quite to the contrary, because, neglecting reason, they were able in the most secret ways to communicate with God.
at 05:33

Thank you for the post. As someone who is both a Gnostic priest and a practicing Buddhist it is always wonderful to see that others have come to the same understanding. I have found the writtings of Thich Nhat Hanh to be most valuable in explaining this to both Gnostics and Buddhists that ask me how I can be both at the same time.
I think I should add you to my list of "Sparks of Light" on my blog for others to find.