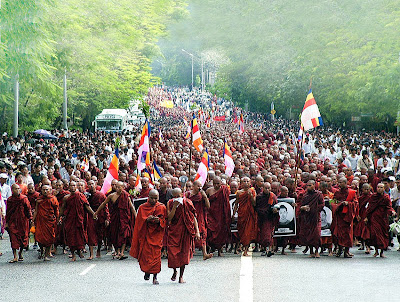 Some barefoot and some in sandals, they advanced steadily though the streets of Rangoon yesterday in a crimson tide of protest.

The shaven-headed monks of Burma led a demonstration of more than 100,000 against the impoverished nation's military leaders.

Behind them in a column stretching for at least a mile through the city centre were civilians, students and political activists.

The march, cheered and applauded by thousands of bystanders, is the latest and largest in a series of protests by Burma's monks and dissidents. Diplomats fear that the country has now reached a turning point, with the generals who have ruled the country with an iron fist for nearly half a century facing the biggest challenge to their power for 20 years.

They could crush the dissent - as they did 1988, leaving at least 3,000 dead - or they can give the monks free rein - and risk the movement spreading across the country. 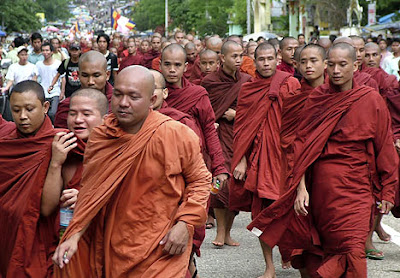 "Secondly, that we could see some sort of counter-reaction, which would be a disaster, although in terms of probability it, I'm afraid, ranks quite high."

If the military do come down hard on the Buddhist monks, who are revered by the bulk of the population, it risks turning pockets of dissent into nationwide outrage.

The monks are staging more protests against its military rulers - despite threats by the government that they will use force to quell the demonstrations.

Several hundred monks have marched into Yangon's Shwedagon Pagoda, the focal point of the largest anti-junta demonstrations in 20 years.

Many were carrying flags, including some bearing the image of a fighting peacock used by students in a 1988 pro-democracy uprising the generals crushed with the loss of around 3,000 lives.

Lorries with loudspeakers have been driving through Burma's main city of Rangoon warning residents to stop anti-government protests. 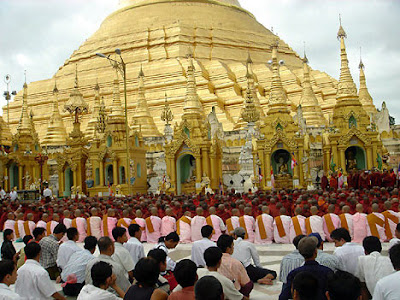