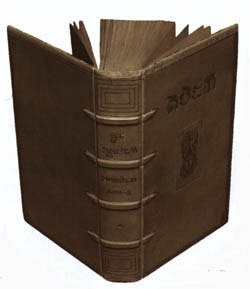 Organization of the Canon

There exists an agreed-upon group of ancient Indian scriptures of Buddhism, called by the Sanskrit term Tripitaka ("Three Baskets"), called Sān Zàng 三藏 or "Three Storehouses" in Chinese. Several hundred times the size of the Christian Bible, the Tripitaka is divided into three parts:
The Chinese version of the Buddhist canon is not limited to translations from Sanskrit and Pali, the north Indian languages in which Buddhist texts were originally written, but also includes works originally written in Chinese after the transmission of Buddhism to China, so it is larger than the original collection of Sanskrit and Pali texts, and is referred to as the Dà Zàng Jīng 大藏經 or "Great Treasury Scriptures."

The challenges faced by translators of religious material from Indian languages to Chinese were many, and the result was the creation of a literature that could be understood only with a good deal of special training. Although materials originally composed in Chinese were easier to understand than translations most of the time, even these often used vocabulary or treated subjects that demanded a knowledge of the Indian heritage to understand. The Chinese Buddhist canon is therefore immense, but largely unknown to most Chinese, including most Chinese Buddhists, and many of the most "popular" scriptures are in fact used only as liturgical texts chanted as a religious exercise to gain spiritual merit. In modern times, despite the establishment of nearly universal literacy in modern Chinese, Chinese have shown little interest in modernizing these translations and trying to render them more readily understood.

The list of major Buddhist writings given here includes only a few brief works (all found in the canon) that actually circulate widely among Chinese Buddhists. Most of them were originally composed in Sanskrit and the Chinese translations are by no means colloquial today; many of the texts are popular to chant as a merit-gaining religious exercise, but are not necessarily understood without further instruction.

Usage Note. Although the term jīng 經 is best translated "scripture" in other contexts, in the case of Buddhist works it is conventional to retain the original Sanskrit term "sūtra" in English translations.

Dàbēi Chàn 大悲懺 "Great Compassion Penance"
A text where the ever popular bodhisattva Guānyīn appears as the special agent of the buddha Amitabha's compassion.

Ēmítuó Jīng 阿彌陀經 "Sutra of Amitabha" ("Lesser Sukhavati-Vyuha Sutra")
Translated from Sanskrit by Kumarajiva.
This work is associated with the Buddha Amitabha (often known in English by his Japanese name Amida), associated with the Pure Land sect, which teaches that by sincerely calling upon the Amitabha Budda one can be reborn into the Pure Land (jìngtŭ 淨土) that he governs. This work is commonly used in private meditation and is recited in services for the dead.

Jīngāng Jīng 金剛經 "Diamond Sutra" (Vajraccedika-prajña-paramita Sutra)
Translated into Chinese from Sanskrit by Kumarajiva (Jiūmóluóshī 鳩摩羅什), a Jīn dynasty missionary to China famed for his translations.
The text, in the form of a dialog between the Sakyamuni Buddha and a disciple, stresses that all appearances are mere illusions projected by one's own (illusory) mind. In the course of the discussion, the Buddha predicts that another buddha will follow him years later to repeat the message, a passage that is interpreted as referring to Amitabha, but also is sometimes cited by "heretical" sects to identify their leaders as buddhas.

Liánhuá Jīng 蓮花經 "Lotus Sutra" (Saddharma Pundarika Sutra).
Translated from Sanskrit by Kumarajiva.
The Lotus Sutra is especially associated with the Tiāntái 天台 sect, although it is widely used by all sects. It asserts the transcendent character of the Buddha and purports to contain his direct teachings, including the assertion that there are many paths to enlightenment, and the possibility of help from bodhisattvas. Often separately used is chapter 24, called Pŭmén Pĭn 普們品 "All-Sided One." The Pŭmén Pĭn describes the bodhisattva Avalokiteshvara, who in China is the popular goddess Guānyīn 觀音.

Liù Zŭ Tán Jīng 六祖壇經 "Platform Sutra of the Sixth Patriarch"
Composed in Chinese by Făhăi 法海, a priest of the Táng dynasty.
This work recounts the succession of a humble sweeper boy who become the sixth patriarch of Chán 禪 school, Huìnéng 慧能 and presents his teachings. Because it was composed directly in Chinese, this work is readily accessible to modern readers with a knowledge of Classical Chinese.

Xīn Jīng 心經 "Heart Sutra" (Mahaprajñaparamita-hridaya Sutra)
Translated into Chinese from Sanskrit by Xuánzàng 玄奘 (A.D. 596-664), a Chinese monk who made a journey to India (629-645) and returned with scriptures, which he translated into Chinese. This tiny work teaches that form and emptiness are identical and is widely chanted, but is especially associated with the Chán 禪 school. Its popularity is probably largely due to its shortness, which makes it easy to copy, chant, paint on pottery, or even tattoo.

Yào Shī Jīng 藥師經 "Sutra of the Master of Medicine"
Translated from Sanskrit by Xuánzàng.
This short work contains twelve promises of salvation for both the living and those in purgatory.
at 10:16