Did you know that Bodhisattva sounds just like Bodhisritva, the old Slavonic term for the Theotokos (Blessed Virgin Mary)? 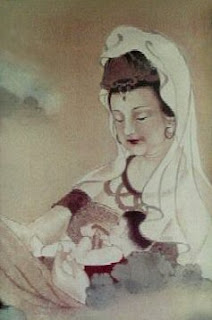 Wow, what an amazingly close connection! Let us not forget that Kwan Yin is a chief Bodhisattva, who stuck around to help mortals though she could have gone on to better places eons ago, and she is the Mary of the East. If China could recall her, it might make a start to getting back on its "bound" feet. I recommend saying a quick prayer to Kwan Yin any time you need help in a Chinatown, Chinese tea shop, restaurant, or conducting a real estate deal with Asians!

Quite seriously, when I was in China 9 years ago in early Sept, I told the very intelligent tour leader not to forget Qwan Yin. He was polite but clearly dubious. The next morning, the group waited and waited for him. It turned out he had gotten into a wreck and was taken to hospital. After saying a prayer for his recovery, I concluded Qwan Yin was letting him know she is not to be ignored! Once one knows Kwan Yin, one also meets the Theotokos.
at 10:24