Jesus as a Reincarnation of Buddah? 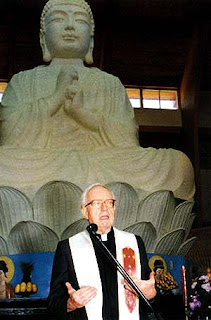 (a) reincarnation, (b) a philosophy of life on earth as suffering for which we must be liberated, (c) the oneness of all things, (d) the divine light, (e) various afterlife realms to journey through, (f) the human goal of attaining Christhood is identical to the goal of attaining Buddhahood, (g) the distinction between Jesus (the human) to Christ (the spirit of human-divine unity) and the distinction between Buddha (the human) and Dharmakaya (the Clear Light of Ultimate Reality), (h) the concept of karma, (i) and the importance of good works. This is not a complete list.

Cayce revealed that the Christ spirit (the spirit of human-divine unity) constitutes the impelling force and core of truth behind all religions that teach that "God is One" and "all is one". This includes Confucianism, Brahmanism, Buddhism, Shintoism, Judaism, Platonism, Christianity and Islam.
at 02:57

Fascinating article. Personally, I feel that all religions and spiritual paths are interconnected. Different reflections of the same Truth but through the lens of different cultures, histories and languages.