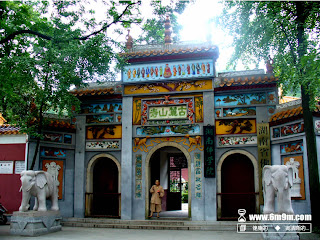 In the city itself, Changsha has unique natural scenery and many places of interest. There are natural scenic spots including the Yuelu Mountain, the Xiangjiang River that runs across the city from south to north, the Shuilushou Island in the centre of the river, and the Liuyanghe River, which meanders to the Xiangjiang River in the northern part of Changsha. In the suburbs, there are tourist spots such as the Hongshan Holiday Resort,the Huitang Hot Spring, Mount Dawei National Forest Park, Mount Heimi, Moon Island, the Shiyan Lake Resort and Mount Daowu. Mount Yuelu is said to be the north point of Mount Hengshan, one of the five sacred mountains in China.

Hangshan, stretching for 400 kilometres is in the Central China's Hunan Province and ranks among the five most famous mountains in China. Mount Hengshan has long been known as the mountain of longevity. Stone inscriptions left by emperors and scholars from different dynasties dot many legendary scenic spots, eulogizing the harmony of nature and man. Local villagers retain their own lifestyle in the midst of the chaos of modernity.

Buddhist temples and Taoist palaces sit side by side. A grand praying ceremony for peace and stability was held on October 10, 2000.

A very famous scene at the mountain is the maple leafs in autumn, described by Du Mu (803-c.852), a famous Tang-dynasty (618-901) literati (man of letters) , as "redder than the flowers in early spring. " The mountain is also renowned for its historical and cultural significance. It is a place where religions like Confucianism, Taoism and Buddhism co-exist peacefully.
at 13:12