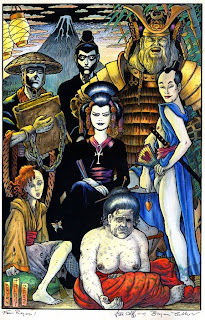 The Endless (Destiny, Death, Dream, Destruction, Despair, Desire and Delirium) are a group of beings who embody powerful forces or aspects of the universe. They have existed since the dawn of time and are thought to be among the most powerful beings in the universe. All of The Endless play major roles.

The Endless are a somewhat dysfunctional family of seven siblings. They may appear in different forms, but usually have light skin and black hair, with the exception of redheads Destruction and Delirium. Their appearance can change to fit the expectations of others. When asked by Marco Polo if Dream is always so pale, the Dream King replies, "That depends on who is watching."

The Endless spend most of their time fulfilling their functions as embodiments of natural forces. For example, Death leads the souls of the dead away from the realm of the living, while Dream oversees the realm of dreams and imagination ("The Dreaming") and regulates dreams and inspiration. Destruction describes the Endless:

Some of the Endless are more dedicated to their tasks than others. The younger Endless, especially Desire, are known to play games with mortal lives. Destruction, often called "The Prodigal", abandoned his duties altogether. If one of the Endless is destroyed, then he or she will be replaced by another aspect of their role, but this does not occur if they are simply absent or inactive. In such cases, the aspect of existence supervised by that member of the Endless becomes more random and chaotic.

In addition to overseeing their own sphere of influence, the Endless also help to define their own opposites. This dualistic aspect of the Endless has been confirmed in the case of Death, who not only ends lives, but also begins them. Destruction has an interest in creative pastimes, including art, poetry and cooking. Dream seems to have some power to shape reality, as a large number of entities, dreaming of an alternate reality, create said reality. Also, Delirium has some kind of strange logic that only makes sense to her, but that allows her to understand things that others do not. It is likewise hinted that Despair defines hope and Destiny defines freedom.

The origin and exact nature of the Endless is unknown. Few hints are ever given in the series as to exactly why the Endless exist. They seem to be natural forces. They have at times been described as "a creation of the consciousness of living beings".

The Endless are as old as the concepts that they represent. The Endless are said to be older than the fairyfolk, gods, and other supernatural beings. Their exact ages in years are unknown, but they are known to have existed long before life on Earth. Death has claimed that she was there when the first living thing stirred, and Destiny has said that Dream gave the Earth itself the fond dream of being able to support life. Dream, according to Abel, was created shortly after Death, as living things could die before they could dream.

One of the few references to any sort of parentage for the Endless  is where some sentience in the Necropolis Litharge that guards the symbols of each of the Endless wails "like a mother sorrowing for her departed child."

The Endless are not known to have proper names, although Dream has a habit of collecting different names for himself. They are each known by their respective function.

Destiny: The oldest of the Endless, Destiny appears as a blind man dressed in grey or brown robes, carrying a large book, the Cosmic Log. The book is chained to him, or he is chained to the book, and within the book is written the entire sum of existence, past, present and future. Destiny seems the most possessed by his function and responsibilities of any of the Endless. He rarely demonstrates much personality. His symbol is his book. His parentage is the only one mentioned, other than Daniel's.

Death: Death appears as a spunky, attractive, level-headed young Goth woman. She wears a silver ankh (representing the afterlife) and has a marking similar to an Eye of Horus around her right eye. She prefers to dress and act casually, and is on better terms with Dream than any of the other Endless. Her symbol is the ankh.

Dream I (Morpheus): Dream's usual appearance is as a tall, pale man with wild dark blue-black hair. He dresses in a shapeless cloak of "night" with "flames dancing in its folds". His eyes are pools of shadows with glimmers of light within. He is known by many names, most commonly "Morpheus". He has a long history of insensitivity towards others, and throughout his life he must come to deal with his past cruelties. He is very concerned with fulfilling his responsibilities. His symbol is his dream-helm, made from the spine and skull of a long-dead god.

Dream II (Daniel): Morpheus' successor appears as a tall, pale young man with white hair and a white costume. Like Morpheus, his eyes are formed by shadows with a glimmer of light in their center. Before becoming the new Dream at the end of The Sandman, he was a young boy named Daniel, which he later retains as a name. Daniel was gestated in dreams for two years, the child of Lyta Trevor-Hall and the ghost of Hector Hall. He is generally softer in his approach than Morpheus. Daniel carries an emerald eagle stone, although his symbol remains the same (that of the dream-helm).

Destruction: A very large, robust man with red hair, who sometimes appears bearded and sometimes shaven. Destruction abandoned his responsibilities as one of the Endless three hundred years ago, causing much conflict between him and his siblings. Since abandoning his realm, the other Endless usually refer to him as "the Prodigal" or "Brother" rather than "Destruction". He has a passion for creative and constructive endeavors, but little talent. His symbol is a sword. His text is normal, but is in a balloon with a bold outline.

Desire: Desire is beautiful, slim, and truly androgynous, capable of appearing as a man, a woman, neither, or possibly both. Desire has a cruel streak and a long-standing rivalry with Dream. His/her symbol is a pink-tinted glass heart shape. Although Desire is Despair's twin, in a sense he/she is older than Despair. The current incarnation of Desire is the original one, while Despair is currently in her second incarnation.

Despair I: In her first form, Despair had many of the same physical qualities as her later form, but is taller and is tattooed with intricate red lines. She was also much more talkative than her later incarnation. She is occasionally mentioned in passing.

Despair II: A short, obese woman with greyish skin and irregularly-shaped teeth. She is always naked. Despair has a cold, quietly intelligent manner. She has a habit of carving her flesh with a hooked ring that she wears. This hooked ring is also her symbol.

Delight/Delirium: The youngest of the Endless, Delirium appears as a young girl whose form changes the most frequently of any of the Endless, based on the random fluctuations of her temperament. She has wild multicolored hair and eccentric, mismatched clothes. Her only permanent physical characteristic is that one of her eyes is emerald green (usually the right side) and the other pale blue with silver flecks (usually the left side), but even those sometimes switch between left and right. She was once known as Delight, but some traumatic event caused her to change into her current role. Her symbol is an abstract, shapeless blob of colors.

Several entities have falsely claimed to be members of the Endless. "Dread of the Endless" attempted to conquer the Dreaming. She presented herself as Dream's sister. Titans Gyges and Garamas identified themselves as "Duplicity" and "Deceit" in an attempt to gain control of the Heart of the Dreaming.
at 07:13 No comments: