Boy chosen by Dalai Lama turns back on Buddhist order 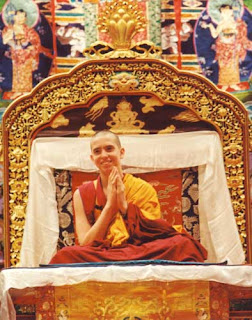 As a toddler, he was put on a throne and worshipped by monks who treated him like a god. But the boy chosen by the Dalai Lama as a reincarnation of a spiritual leader has caused consternation – and some embarrassment – for Tibetan Buddhists by turning his back on the order that had such high hopes for him.

Instead of leading a monastic life, Osel Hita Torres now sports baggy trousers and long hair, and is more likely to quote Jimi Hendrix than Buddha.

Yesterday he bemoaned the misery of a youth deprived of television, football and girls. Movies were also forbidden – except for a sanctioned screening of The Golden Child starring Eddie Murphy, about a kidnapped child lama with magical powers. "I never felt like that boy," he said.

He is now studying film in Madrid and has denounced the Buddhist order that elevated him to guru status. "They took me away from my family and stuck me in a medieval situation in which I suffered a great deal," said Torres, 24, describing how he was whisked from obscurity in Granada to a monastery in southern India. "It was like living a lie," he told the Spanish newspaper El Mundo. Despite his rebelliousness, he is still known as Lama Tenzin Osel Rinpoche and revered by the Buddhist community. A prayer for his "long life" still adorns the website of the Foundation to Preserve the Mahayana Tradition, which has 130 centres around the world. The website features a biography of the renegade guru that gushes about his peaceful, meditative countenance as a baby. In Tibetan Buddhism, a lama is one of a lineage of reincarnated spiritual leaders, the most famous of which is the Dalai Lama.

According to the foundation biography, another leader suspected Torres was the reincarnation of the recently deceased Lama Yeshe when he was only five months old. In 1986, at 14 months, his parents took him to see the Dalai Lama in Dharamsala, India. The toddler was chosen out of nine other candidates and eventually "enthroned".

At six, he was allowed to socialise only with other reincarnated souls – though for a time he said he lived next to the actor Richard Gere's cabin.

By 18, he had never seen couples kiss. His first disco experience was a shock. "I was amazed to watch everyone dance. What were all those people doing, bouncing, stuck to one another, enclosed in a box full of smoke?"
at 13:19 No comments: