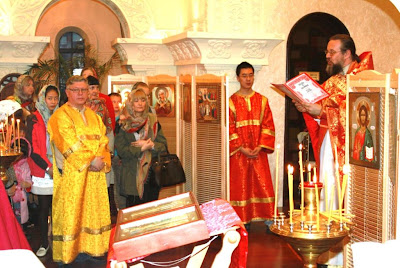 Worship at the Dormition Church-Museum on the territory of Russian Embassy in China during the Holy Week occurred daily. Rector of the Dormition Church priest Sergey Voronin was helped by cleric of Australian Diocese of the Russian Orthodox Church outside Russia, Fr Alexis Duke, and a cleric of the Orthodox Church of Czech Lands and Slovakia, Priest Igor Efremushkin.

At the Paschal liturgy more than 500 people came to pray. At the service were, in particular ambassadors and Minister-Counselors of Russia, Ukraine, Belarus, Greece, the Republic of Macedonia, diplomats from Moldova, Serbia and Montenegro. Parishioners were given the Gospel of Mark and a brochure about the Orthodox Church and church sacraments. During the liturgies of Holy Saturday and Pascha there were more than 200 communicants.

On April 22, 2012, the day of Antipascha (Saint Thomas Sunday), the Russian Cultural Center in Beijing had the Paschal celebration hosted by the Sunday School pupils of the Dormition Church. 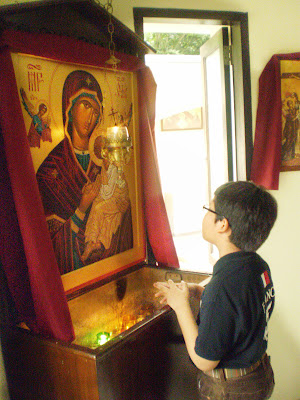 On April 15, 2012 at St. Nicholas Church-Monument was held in Shanghai festive Paschal service, which was celebrated by the rector of the local Orthodox community Archpriest Alexei Kiselevich. Local authorities gave a permit to conduct church services, after a long delay: the last time the faithful gathered for prayer in this unique temple remaining from the first Russian emigration, was exactly one year ago. At this time, to celebrate the Orthodox Pascha, about 400 believers of various nationalities - Russian, Ukrainians, Belarusians, Serbs, Bulgarians, Romanians, Greeks, French, Dutch and others came to the church. Orthodox came from Dalian, Hangzhou, Suzhou, Nanjing, Ningbo, Guangzhou and other cities in China. Holy Communion was taken by more than 160 people. The service was attended by Consul General of Russia, Ukraine and Belarus, the leadership of the Russian Club in Shanghai. For the first time the Church could not accommodate everyone - a lot of people stood along the walls of the temple, awaiting the opportunity to venerate the icons, to go to confession, take the Holy Communion, blessing of cakes and eggs. Quite a large group of fellow countrymen during the service was forced to remain on the steps of the church and on the street. By 11 o'clock most of them due to lack of space, even moved into the roadway. Quiet Street Gaolan-lu became a piece of real Russia, and in areas adjacent to the temple one could hear primarily Russian speech. After the service a tea party was organized, there was a show of children's Paschal play, prepared by the pupils of the Sunday school "Kolosok." 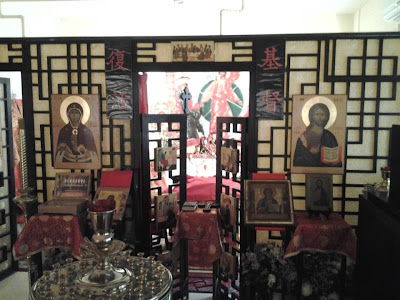 Paschal services in Hong Kong were conducted by Fr Dionisy Pozdnyaev, the rector of Ss Peter and Paul Russian Orthodox Church parish. At the Paschal service there was more than a hundred people, 67 took the Holy Communion. Divine service was performed in Slavonic, English and Chinese, and the Gospel was read in an even greater number of languages.

At the services were the diplomats of General Consulates of Russia in Hong Kong and Guangzhou, as well as citizens of Ukraine, Belarus, Moldova, China, USA, France, Great Britain, Austria, Switzerland and Sweden. Among the worshipers were guests from Shenzhen, Guangzhou, Xiamen, Qingdao, Beijing, Zhuhai and Taiwan. 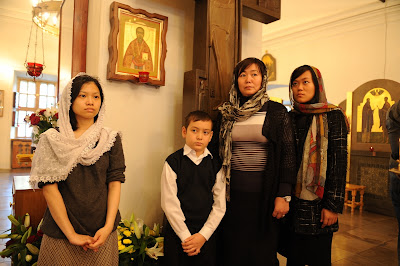 During Paschal evening prayers the worshippers were given the Gospel of Mark in Chinese, Slavonic, English, and Russian, published in Hong Kong by the care of parishes in Beijing, Shenzhen and Hong Kong to commemorate the 300th anniversary of the Beijing mission, and in commemoration of the Paschal liturgy. After the Paschal vespers, a concert of children's choir of the parish, was organized on the occasion of the Holy Resurrection of Christ.

During Bright Week there were Paschal services conducted in Shenzhen and Guangzhou. Worship in Guangzhou, which was celebrated by a cleric of Khabarovsk diocese Hieromonk Nicanor (Lepeshev), was attended by more than 50 people, which is considerably larger than last year.