In Japan, Buddhist monks do what's called the "Ox Walk" in busy city centres. They will walk deliberately slowly and ring a bell each time they take a step. If someone gives them alms, they will stop and recite a prayer for them, then continue their "Ox Walk". It's meant to be a reminder to the people to slow down and not rush, but live in the moment. Here's a video of a Tokyo monk Ox Walking in the CDB. 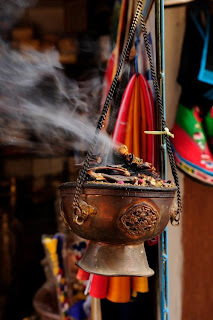 Religious leaders have contended for millennia that burning incense is good for the soul. Now, biologists have learned that it is good for our brains too. An international team of scientists, including researchers from Johns Hopkins University and the Hebrew University in Jerusalem, describe how burning frankincense (resin from the Boswellia plant) activates poorly understood ion channels in the brain to alleviate anxiety or depression. This suggests that an entirely new class of depression and anxiety drugs might be right under our noses.

"In spite of information stemming from ancient texts, constituents of Bosweilla had not been investigated for psychoactivity," said Raphael Mechoulam, one of the research study's co-authors. "We found that incensole acetate, a Boswellia resin constituent, when tested in mice lowers anxiety and causes antidepressive-like behavior. Apparently, most present day worshipers assume that incense burning has only a symbolic meaning."

To determine incense's psychoactive effects, the researchers administered incensole acetate to mice. They found that the compound significantly affected areas in brain areas known to be involved in emotions as well as in nerve circuits that are affected by current anxiety and depression drugs. Specifically, incensole acetate activated a protein called TRPV3, which is present in mammalian brains and also known to play a role in the perception of warmth of the skin. When mice bred without this protein were exposed to incensole acetate, the compound had no effect on their brains.
at 00:01 No comments:

Yoga is a traditional Indian discipline of the mind and body. Depictions of yoga-like meditation have been found on seals dating from more than 3,000 years ago, however it was Indian sage Patanjali who compiled the first yoga doctrine, the Yoga Sutras, about 2,200 years ago.

Yoga, or Rāja (Royal) Yoga, is considered one of the six orthodox schools of Hindu philosophy.

The development of Sufism was considerably influenced by Indian yogic practises, where they adapted both physical postures (asanas) and breath control (pranayama). The ancient Indian yogic text, Amritakunda, ("Pool of Nectar)" was translated into Arabic and Persian as early as the 11th century.

Yoga is intimately connected to the religious beliefs and practices of the Indian religions. The influence of Yoga is also visible in Buddhism, a descendant of Hinduism, which is distinguished by its austerities, spiritual exercises, and trance states.

Yogacara (Sanskrit: "Practice of Yoga [Union]"), also spelled yogāchāra, is a school of philosophy and psychology that developed in India during the 4th to 5th centuries.

Yogacara received the name as it provided a yoga, a framework for engaging in the practices that lead to the path of the bodhisattva. The Yogacara sect teaches yoga in order to reach enlightenment.

Zen (the name of which derives from the Sanskrit "dhyana" via the Chinese "ch'an") is considered a form of Mahayana Buddhism. The Mahayana school of Buddhism is noted for its proximity with Yoga. In the west, Zen is often set alongside Yoga; the two schools of meditation display obvious family resemblances. This phenomenon merits special attention since the Zen Buddhist school of meditation has some of its roots in yogic practices. Certain essential elements of Yoga are important both for Buddhism in general and for Zen in particular.

Yoga is central to Tibetan Buddhism. In the Nyingma tradition, practitioners progress to increasingly profound levels of yoga, starting with Mahā yoga, continuing to Anu yoga and ultimately undertaking the highest practice, Ati yoga. In the Sarma traditions, the Anuttara yoga class is equivalent. Other tantra yoga practices include a system of 108 bodily postures practiced with breath and heart rhythm. Timing in movement exercises is known as Trul khor or union of moon and sun (channel) prajna energies. The body postures of Tibetan ancient yogis are depicted on the walls of the Dalai Lama's summer temple of Lukhang. A semi-popular account of Tibetan Yoga by Chang (1993) refers to Dumo, the generation of heat in one's own body, as being "the very foundation of the whole of Tibetan Yoga" (Chang, 1993, p7). Chang also claims that Tibetan Yoga involves reconciliation of apparent polarities, such as prana and mind, relating this to theoretical implications of tantrism.

Tantrism is a practice that is supposed to alter the relation of its practitioners to the ordinary social, religious, and logical reality in which they live. Through Tantric practice an individual perceives reality as maya, illusion, and the individual achieves liberation from it. This particular path to salvation among the several offered by Hinduism, links Tantrism to those practices of Indian religions, such as yoga, meditation, and social renunciation, which are based on temporary or permanent withdrawal from social relationships and modes.

During tantric practices and studies, the student is instructed further in meditation technique, particularly chakra meditation. This is often in a limited form in comparison with the way this kind of meditation is known and used by Tantric practitioners and yogis elsewhere, but is more elaborate than the initiate's previous meditation. It is considered to be a kind of Kundalini Yoga for the purpose of moving the Goddess into the chakra located in the "heart," for meditation and worship.

The goal of yoga may range from anywhere between improved health and reaching Moksha.Within the monist schools of Advaita Vedanta and Shaivism the goal of yoga takes the form of Moksha, which is liberation from all worldly suffering and the cycle of birth and death (Samsara), at which point there is a realisation of identity with the Supreme Brahman. In the Mahabharata, the goal of yoga is variously described as entering the world of Brahma, as Brahman, or as perceiving the Brahman or Atman that pervades all things. For the bhakti schools of Vaishnavism, bhakti or service to Svayam bhagavan itself is the ultimate goal of the yoga process, wherein perfection culminates in an eternal relationship with Vishnu, Rama or Krsna.
at 12:58 No comments:

"Here in meditation, we say, 'Stop thinking, pay attention to the breath.' And your mind says, 'F*** you. I will do whatever I want,'" says Levine. "We begin to understand that it is inner anarchy."
at 01:54 1 comment: