The Spectre: The Redeeming Wrath & Vengeance of God 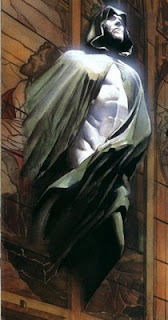 The Spectre is one of the most ancient and powerful beings in the universe. It's origins date to the very dawn of creation, where it began life as the angel named Raguel. Raguel was created by The Presence alongside the likes of the archangels Michael, Gabriel and the infamous Satanael.

For a time, the hosts of heaven were content to serve the Presence, but around 10 billion years ago, when the planet Earth formed, one-third of the Angels were tempted by Sataniel (aka Lucifer Morningstar) and rebelled against Heaven. During the fiery battle of Lucifer and his rebellion, "The Big Bang" occurred, which created our universe. Raguel joined Lucifer's rebellion and after the war was lost, he was renamed Aztar and given a choice by the Presence. Rather than be cast down to hell, Aztar reluctantly agreed to relinquish all memory of his former existence to become the embodiment of God's wrath. Men would henceforth know him as the Spectre.

For millennia, the Spectre served as the Presence's hand on Earth. Circa 3000 BC, in Mesopotamia it destroyed the cities of Sodom and Gomorrah. And in ancient Egypt, (c. 1260 BC) it killed the pharoah Ramses for his crimes against the Hebrews. Despite the sorceror Nabu's warnings, the pharaoh's son, Ramses II, continued the persecution of the Hebrews. In retaliation, the Spectre slayed the first-born sons of Egypt then protected the Hebrews by parting the Red Sea as they fled the pharaoh's troops.

Again around 1250 BC, the Spectre destroyed the walls of Jericho and caused the sun to stand still in the sky, allowing Joshua to lay waste to the enemies of Israel. (The archangel Gabriel also participated in the slaughter.)

Life for this terrible being changed dramatically with the birth of Jesus of Nazareth. The Presence banished the Spectre to limbo because vengeance and forgiveness (Jesus) could not walk the Earth at same time.

Following the crucifixion of the Christ, the Spectre went berserk, raising the dead and causing widespread chaos. The forces of Heaven were able to temper the entity's rage by binding it for the first time to a human soul: an Indian man named Caraka, who was murdered along with his family by the necromancer Beltane. Caraka was corrupted by the massive power and and relinquished his bond to the Spectre. He later became the demon Azmodus.

It is uncertain how many human have hosted the Spectre since Jesus' death. Each host shares one trait, though: an unjust death. In Britain, circa 240 AD, the Spectre was again bound to a human soul, that of a young woman brutalized by highwaymen. The Spectre's most well-known host is Jim Corrigan, whose life remains in recent memory. Corrigan was born on January 3, 1900 into the strict Christian household of his father, Jebediah, who was a preacher.

Eventually, Corrigan's soul found peace. He relinquished the Spectre, and went on to the afterlife.
at 01:04 No comments: