The Three Ways to the Single Goal

Not only are the Chinese people the most numerous in the world: it also has a very rich culture and ancient statehood. Hundreds of years B.C. the Chinese had established the way of life which was preserved with little changes until very recently. Silk and paper, gunpowder and printing press speak for the material culture of China; names of Confucius and Lao-Tse remind us of its spiritual heritage.

Chinese religious scene is often understood as some sort of ecumenism where "anything goes". This is not so: three traditions of Chinese religious thought -- Confucianism, Taoism, and Buddhism -- constitute certain structure known as "the three ways to the single goal". This structure, moreover, was remarkably stable and resistant to external influences.

Fr. Seraphim (Rose), who had been a serious scholar of ancient Chinese culture, and for whom Taoism became a bridge to the Christian Orthodox faith noticed that

"...there is a very strong idea in the Chinese mind of orthodoxy: that there is a right teaching, and that the whole society depends on that right teaching. This orthodoxy is expressed in different forms ... Taoism is the esoteric side, and Confucianism is the more social side."

Reserved and cautious approach to alien influences helped the Chinese to keep their culture and civilization throughout millennia in numerous conflicts with neighbors and nomads. We all remember the timeless advise:

"...If we are truly born to imitate, why shouldn't we borrow then from the Chinese their wise incognizance of foreign tribes, and get redeemed from tyranny of fashion?" (Griboedov, Woe from Wit)

Traditional way of life based on the notion of orthodoxy was the foundation of the Chinese society and state. Western attempts to establish contacts with China, including Christian missionary efforts, remained largely unsuccessful due to disregard (or total ignorance) of that foundation.
at 04:07 No comments: 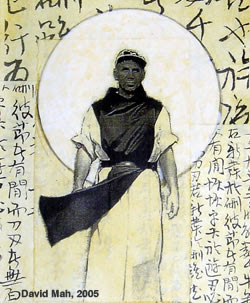 Writer Edward Rice would later call Merton, in a book by the same name, The Man in the Sycamore Tree. Xiao Shuang aspires to be like Merton who is thought to have been a reincarnation of the Buddha by many Tibetan and Indian practitioners: He aspires to be a seeker of truth, not a symbol of reverence.
at 17:11 No comments: