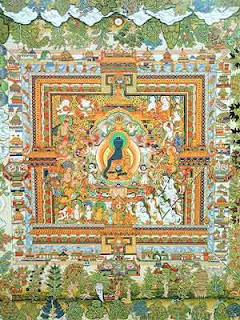 As sickness rises from wrong conditions or maladjustments of good conditions, the followers of Buddha, by observing the Precepts, following the Noble Path and practicing meditation, should be largely if not wholly free from sickness. Wise control of the mind is the best preventative of sickness and is the best method of cure. If our body, mind and breathing are well regulated and our circumstances are in harmony with the teachings of Buddha, we should be able to throw off most sicknesses and heal most wounds. We should do everything we can to keep well, because sickness is a discredit to our enlightenment; besides being a hindrance to our practice of meditation.

There are two divisions of this subject that should be kept in mind: First, the nature of the sickness, its development and its symptoms; second, methods of treatment. Under the first heading we should distinguish between sickness caused by external conditions and sickness caused by irregularities within our own minds. In either case we should notice the beginning of sickness and try to prevent its becoming serious by remedying the conditions both external and internal as early as possible. What are the best remedies? The best remedy is the practice of stopping and insight. Stopping means removing dangerous conditions and ending bad habits. Insight means an examination of and reflection on the emptiness aspect of all phenomena. If we cease to let the mind dwell upon symptoms and hold it to a reflection upon the unreality of both body and ideas concerning its state, then the mind will speedily become tranquil, and the symptoms will disappear. The reason for this is that most of our sicknesses come from irritations within the mind; and if these can be controlled by right mindfulness, then the mind will become kind and tranquil and the sickness will disappear. Medicines made up of either minerals or herbs or both may be used if they have some correspondence with the sickness. The same thing is true, also, in the application of ways and means for practicing insight – each practice must have correspondence with its mental sickness,

In the treatment of sickness by some process of insight, it is necessary for us to do so in ten ways, if we are to expect good results. The ten ways are:

(1) Faith. We must believe that the remedy is going to help us.

(2) Application. We must make use of the remedy in the right way and at the right time.

(3) Diligence. It means to apply the remedy whole heartedly, without relaxation until the sickness is cured.

(4) Permanent conditions, This means that we are to keep the mind concentrated upon the Dharma.

(6) Expedient means. This means that we are to keep our right breathing, right practice, and right use of our thoughts in good adjustment and balance.

(7) Long practice. This means that if we are benefited by the means or practice, we are to continue it faithfully without regard to the passing of time.

(8) Choice of means. This means that we are to use observation to note whether a remedy is useful or harmful and be governed as to its continued use accordingly.

(9) Maintenance and protection. This means that we are to protect the body by the best use of our mind.

(10) Hindrances. This means that if we are benefited by our practice of meditation we shall not boast of it to others, and if we are unsuccessful in getting rid of hindrances we must not give rise to doubts and slanders.

If we treat our sicknesses in these ways, no doubt we will have good results.
[Selections from Chinese Sources, Dhyana for Beginners, A Buddhist Bible, pgs. 488-489]
at 18:24 3 comments:

What we don't hear about Tibet 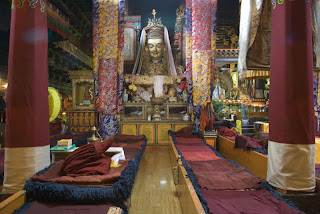 While the world moralises over China's occupation, feudalism and abuse in Tibetan culture has been conveniently forgotten.

Sexual abuse in monasteries and oppressive feudalism in traditional Tibetan society has been factored out of the argument against China's occupation, oversimplifying it.

Tibet seems like as a celestial paradise held in chains, but the west's tendency to romanticise the region's Buddhist culture has distorted our view. Popular belief is that under the Dalai Lama, Tibetans lived contentedly in a spiritual non-violent culture, uncorrupted by lust or greed: but in reality society was far more brutal than that vision.

Last December, Ye Xiaowen, head of China's administration for religious affairs, published a piece in the state-run China Daily newspaper that, although propaganda, rings true. "History clearly reveals that the old Tibet was not the Shangri-La that many imagine", he wrote "but a society under a system of feudal serfdom."

Until 1959, when China cracked down on Tibetan rebels and the Dalai Lama fled to northern India, around 98% of the population was enslaved in serfdom. Drepung monastery, on the outskirts of Lhasa, was one of the world's largest landowners with 185 manors, 25,000 serfs, 300 pastures, and 16,000 herdsmen. High-ranking lamas and secular landowners imposed crippling taxes, forced boys into monastic slavery and pilfered most of the country's wealth – torturing disobedient serfs by gouging out their eyes or severing their hamstrings.

Tashi Tsering, now an English professor at Lhasa University is representative of Tibetans that do not see China's occupation as worse tyranny. He was taken from his family near Drepung at 13 and forced into the Dalai Lama's personal dance troupe. Beaten by his teachers, Tsering put up with rape by a well-connected monk in exchange for protection. In his autobiography, The Struggle for Modern Tibet

, Tsering writes that China brought long-awaited hope when is laid claim to Tibet in 1950.

After studying at the University of Washington, Tsering returned to Chinese-occupied Tibet in 1964, convinced that the region could modernise effectively by cooperating with the Chinese. Denounced during the Cultural Revolution, arrested in 1967 to spend six years in prison and labour camps, he still maintains that Mao Tse-Tung liberated his people.

After 1959, China abolished Tibet's slavery, serfdom and unfair taxes. Creating thousands of jobs through new infrastructure projects, it built Tibet's first hospitals and opened schools in every major village, bringing education to the masses. Clean water was pumped into the main towns and villages and the average life expectancy has almost doubled since 1950, to 60.

Even so, in 2001 the Dalai Lama said: "Tibet, materially, is very, very backward. Spiritually it is quite rich. But spirituality can't fill our stomachs."

Freedom for Tibet is not simply a case of liberation from China and the reinstatement of traditional values. Around 70 per cent of the population lives below the poverty line and enhanced spirituality alone will not improve economic conditions. Poverty is not quaint no matter how colourful the culture and the Tibet question is one that should be addressed from a rational, rather than an idealised viewpoint.

Nearby Bhutan, which has a similar Buddhist culture that it tried to preserve by banning television until 1999 and limiting foreign visitors, only held its first democratic elections in 2007. The Dalai Lama now promotes democracy, but Tibet may well have looked worse than it does today if the old order had been left to its own devices.
at 14:02 No comments: