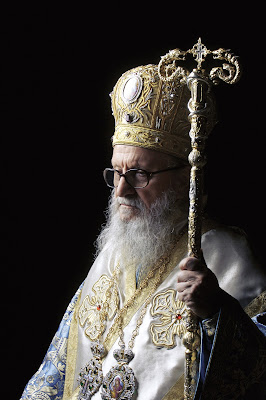 .
The presentation by Archbishop Demetrios, attended by approximately 80 people, was entitled "The Book of Psalms: The Ecumenical and Universal Prayer." It was part of the Goddard Chapel Forum on Religion in America, a lecture series organized and sponsored by the Tufts Chaplaincy.

"In the English-speaking world, the psalms have monumental literary presence," Demetrios said. "There is perhaps no book of the Bible

more beloved and more used than the psalms."

The psalms are applicable to all monotheistic religious traditions, according to Demetrios.

"These are not Jewish prayers or Christian prayers or Muslim prayers; they are human prayers," he said. "We pray the very same prayers through the Book of Psalms," he said.

," O'Leary told the Daily after the lecture.

in Brookline, Mass. and at Harvard Divinity School

The psalms are unique in their direct language, Demetrios said.

"They approach the divine without pretense. There is, in the Psalms, an amazing directness," he said, adding that the psalms provide religious readers the opportunity to connect with God.

"Reading prayer from a psalm is concurrently an act of speaking to God and listening to God," he said. "The psalms are God's voice, God's revelation."

(OCF), was pleased with Demetrios' choice of the book for his lecture.

"It's a beautiful piece of literature," Azmy said.

O'Leary said that the psalms address nearly every human emotion.

"The Book of Psalms go from high emotions of joy … to the middle psalms of laments and anger and almost depression. So you have a whole range of emotions with the Book of Psalms," O'Leary said.

Demetrios' teachings follow the apostolic tradition, which emphasizes the teachings as passed down by Christ's apostles, according to junior Stephanie Phoutrides, a co-founder and former president of OCF.

She was pleased that the OCF community, and the Tufts community at large, was able to hear from a figure like the archbishop.

"I think it's a big deal, especially because there's not a huge Orthodox presence at Tufts," Phoutrides said.

"He was appointed in the same way that the first church fathers were. He is a church father of our time, so he's very important to us," Azmy said.

Azmy emphasized the importance of opportunities for students of religion to interact with figures like the archbishop.

"When these holy men come in, it's very important to ask them spiritual things and take advantage of all their biblical knowledge, all their wisdom," she said.

"These holy men, they have had probably hundreds of thousands of people over their lifetime ask them for advice," Azmy said. "They've seen things over and over again."

Demetrios' religious background and understanding, like that of his colleagues, is invaluable, Azmy said.

"They have a lot of knowledge and knowledge not only comes from their experience, but also from their very intricate study of the Bible and the holy books and spiritual reading," she said.