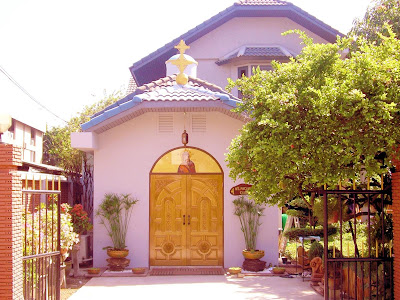 Christianity was first introduced to Thailand by European missionaries. Historically it took on a significant role in the modernization of Thailand. It represents 0.8% of the national population. Christians are numerically and organizationally concentrated more heavily in the North, where they make up an estimated 10% of some lowland districts (e.g., Chomtong, Chiang Mai) and up to very high percents in tribal districts (e.g., Mae Sariang, Mae Hong Son).

Christianity in Thailand began with the work of missionaries or foreign religious workers. In the 1550s the Portuguese mercenaries and their chaplain arrived in Ayutthaya. By 1660, the Vicariate Apostolic of Siam was established under the leadership particularly of Portuguese and French fathers. Later on, Protestants appeared in the new capital of Bangkok in 1826 through the American Board of Commissioners for Foreign Missions representative, Karl Gützlaff followed by Rev. Jesse Casswell (et al.) and Dr. Dan Beach Bradley. These to both switched affiliations to the American Missionary Association (AMA) in 1848 over their support for the Finney revival emphasis on "perfectionism" that the Congregationalist parent organization found unorthodox, effectively ending the work of the ABCFM in Siam. American Baptists arrived in Thailand in 1833 and American Presbyterians arrived in 1840. Daniel McGilvary and William Clifton Dodd were important names in the formation of the Church in Lanna Kingdom of Northern Thaialnd. Burmese Karen evangelists and Dr. Sung of China were part of the early evangelistic efforts to Thailand up until WWII. Other waves of European and American Protestant missions to Thailand were in 1930 and then again after WWII. Korean and other Asian missionaries came in increasing numbers from the 1970s through the 1990s, such Dr. Kosuke Koyama of Japan.

The Laos Mission founded its first church, Chiang Mai Church, now known simply as First Church, Chiang Mai, in 1868. After a brief period of evangelistic success, the mission underwent a time of persecution in 1869, during which two converts were martyred. This persecution was abated in 1878 by the Edict of Religious Toleration.. Parishes and congregations experienced sporadic numerical. The activities of missionaries were predominantly in itinerant preaching, medical institutions and educational facilities as well as introduction of technologies, methodologies and institutional culture which have been generally well-received by the Thai people. They were occasionally able to mobilize large numbers of Thai helpers. Since World War II control of Christian organizations was slowly turned over to Thai Christians and the institutions integrated as private institutions in an increasingly centralized Thailand.

Relations between Christian organizations and the central government have improved. In the 1980s, Thai royal budget for programs of Christian groups appeared for the first time. Evidence of this support includes 15,000 Baht given by the Department of Religion to District 14 of the Church of Christ in Thailand for youth outreach as well as waiving of the cost of tickets on trains for missionaries and for Thai pastors of the denomination.

Christians made and are making substantial contributions to health care and education in Thailand. Such facilities, as Saint Louis Hospital, Bangkok Mission Hospital, Camillian Hospital, Bangkok Christian Hospital were once considered to be among the best in the country. Major Christian schools dot the map of Thailand. European and American missionaries introduced printing press, western surgery, smallpox vaccinations, taught foreign languages and wrote linguistic dictionaries. Thai and Western Christians in the past 50 years have been heavily engaged in administrative reform of church organizations, ecumenical and interrreligious dialogue, social development projects, enculturation or adaptation of the Gospel for Thai culture and have been active in providing leadership in the Thai democracy movement, refugee relief, and improving the status of women, the handicapped and children.

Interreligious dialogue is evidenced by such programs as the Saengtum Seminary, the Sinclair Thompson Lecture Series of Payap University, a Thailand Church History Project coordinated by Rev. Dr. Herbert Swanson in the 1990s and an Institute for Interreligious Dialogue at Payap University. In November 2007, Bangkok's Assumption Cathedral became the venue of ecumenical Pilgrimage of trust, when Christians from different backgrounds gathered to pray together. Among those present were religious leaders of the Roman Catholic Church, the Evangelical Lutheran Church of Thailand, the Church of Christ in Thailand, the Russian Orthodox Church and also young people from Laos, Philippines, Hong Kong, Singapore and Malaysia who came specially for the prayer meetings. Similar programs of worship have been held annually at First Church (Chiang Mai) and elsewhere across Thailand.

Non-denominational efforts and inter-agency coordination have involved such agencies as the Church's AIDS Ministry, Voice of Peace, Lamp of Thailand, World Vision, Worldwide Faith Missions, Christian Children's Fund, McKean Leprosy Hospital (now McKean Rehabilitation Institute), Klong Thuy Slum Ministries, and the Christian Development Fellowship. Thailand has served as the destination of choice in Asian Christian gatherings and has served as the headquarters of the Christian Conference of Asia since the handover of Hong Kong.

First Roman Catholic missionaries in Siam were Friar Jeronimo da Cruz and Sebastiâo da Canto, both Dominicans, who came in 1567. They were killed by the Burmese in 1569. Later there arrived Franciscans and Jesuits. The following period (17-th, 18-th, 19-th centuries) was marked by different stages of persecution and ease between Siamese official powers and Roman Catholic missionaries.

At the beginning of the 20th century, there were about 23,000 Catholic believers, 55 churches and chapels, representatives of monastic orders, social and educational institutions (e.g. orphanages, schools and a seminary and college). During the 20th century, many Roman Catholic congregations arrived to work in Thailand. Thailand is now home to 292,000 Catholics.

On October 22, 1989, the catechist Philip Siphong Onphitak and six companions, who had been killed in 1940 under the suspicion of being French spies, were beatified as the Martyrs of Thailand.

There are several Protestant umbrella organizations. The oldest of them is Church of Christ in Thailand (CCT) formed in the mid-1930s. It consists of Thai, Chinese, Karen, and English-speaking congregations. It is a member of the World Council of Churches and has about 60,000 members.

One of the largest Protestant associations is the Evangelical Foundation of Thailand. Baptists and Seventh-day Adventists are recognized by local authorities as separate Protestant denominations and organized under the same umbrella group.

Among the other Protestant groups represented in Thailand are Lutherans, Adventists, Methodists, Pentecostal and Charismatics, and Anglicans.

There is a recent increase of evangelical Christian ministries operating throughout the country. There are many foreign missionaries and residents who are establishing churches and prayer groups throughout Thailand. One of the largest, Youth with a Mission, currently has over 200 full-time foreign staff and over 100 Thai staff, ministering in 20 locations. Another evangelistic missionary organization, OMF International, has an outreach to place Christian teachers in the Kingdom's schools.

Orthodoxy (Orthodox Christianity) in Thailand is presented by the Representative Office of Russian Orthodox Church including the Orthodox parish of Saint Nicolas in Bangkok (Sukhothai road, Dusit), Ecumenical Patriarchate of Constantinople, and Coptic Orthodox Church.

The mission is headed by Father (Archimandrite) Oleg Cherepanin and serves Russian tourists or citizens in Thailand, local believers of Thai origin, and people of other nationalities, including Romanians, Greeks, French.

, the Orthodox Book of prayer

and the book about the history of Russian Orthodox Church

. In July, 2008, the representative office of Russian Orthodox Church was officially registered by Thailand authorities as foundation "Orthodox Christian Church in Thailand".

In November 2007, Father Oleg Cherepanin took part in ecumenical Pilgrimage of trust in Bangkok’s Assumption Cathedral. Among the present were religious leaders of Roman Catholic Church, Evangelical Lutheran Church of Thailand, Church of Christ in Thailand, Russian Orthodox Church and also the young people from Laos, Philippines, Hong Kong, Singapore and Malaysia who came specially for the prayer.

The year of 2009 was marked by the visit to Thailand of the Russian Orthodox Church delegation headed by Archbishop Hilarion to celebrate the 10th anniversary of Orthodoxy in the country.

and the Holy and Great Synod of the Ecumenical Patriarchate of the Eastern Orthodox Church also have plans to officially establish their parishes in Thailand. The Eastern Orthodox communes in Thailand belong to jurisdiction of Metropolitan of Hong Kong & Southeast Asia Nikitas. Time after time, representatives of Ecumenical Patriarchate organize Church services and Divine Liturgy for their faithful in Thailand with help of the Embassy of Greece in Bangkok.