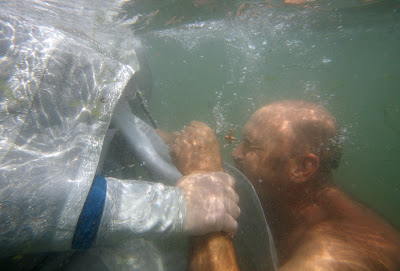 Christians in Russia constitute by some estimates the largest religion of the country (from 15% to 80% of total population by some sources). Meanwhile, approximately 83% of the country residents consider themselves Russian Orthodox Christians, although the vast majority are not regular churchgoers. By official information, there are 68 eparchies of Russian Orthodox Church (Moscow Patriarchate).

There are also from 500,000 to one million so-called Old Believers, who represent an older form of Russian Orthodox Christianity, and who separated from the Orthodox Church in the 17th century as a protest against Patriarch Nikon's church reforms.

According to the Slavic Center for Law and Justice, Protestants make up the second or third largest group of Christian believers, with approximately 3,500 organizations and more than 1 million followers. A large number of missionaries operating in the country are from Protestant denominations. In Russia today, about 280,000 associate with over 2200 congregations of Jehovah's Witnesses, and the Church of Jesus Christ of Latter-day Saints reports over 20,000 adherents in 126 congregations.

The Roman Catholic Church estimates that there are from 600,000 to 1.5 million Catholics in the country, figures that also exceeded government estimates. There is one Roman Catholic Archdiocese (Mother of God at Moscow) with three suffragan dioceses (Saint Clement at Saratov, Saint Joseph at Irkutsk, Transfiguration at Novosibirsk) and Apostolic Prefecture of Yuzhno Sakhalinsk.

The Russian Orthodox Church is organized in a hierarchical structure. Every church building and its attendees constitute a parish (prikhod).

All parishes in a geographical region belong to an eparchy (eparkhiya—equivalent to a Western diocese). Eparchies are governed by bishops (episkope or archierey). There are around 130 Russian Orthodox eparchies worldwide.

Smaller eparchies are usually governed by a single bishop. Larger eparchies, exarchates, and autonomous churches are governed by metropolitans and sometimes also have one or more bishops assigned to them.

The highest level of authority in the Church is represented by the Patriarch of Moscow and All Russia, head of the Holy Synod of the Russian Orthodox Church. The Holy Synod is the governing body of the Church in the period between the Bishops’ Councils.

By information of Saint Tikhon's Orthodox University and other researchers, from one to several hundred thousands of Orthodox believers were repressed for their faith in the Soviet time.

In 1971 the Moscow Patriarchate revoked the anathemas placed on the Old Believers in the 17th century, but most Old Believer communities have not returned to Communion with other Orthodox Christians.

Estimates place the total number of Old Believers remaining today at from 500.000 to 1 millions, some living in extremely isolated communities in places to which they fled centuries ago to avoid persecution. An Old Believer parish in the United States has entered into communion with the Russian Orthodox Church Outside Russia.

Old-Believer churches in Russia currently have started restoration of their property, although Old Believers (unlike the nearly-official mainstream Orthodoxy) face many difficulties in claiming their restitution rights for their churches. Moscow has churches for all the most important Old Believer branches: Rogozhskaya Zastava (Popovtsy of the Belokrinitskaya hierarchy official center), a cathedral for the Novozybkovskaya hierarchy in Zamoskvorech'ye and Preobrazhenskaya Zastava where Pomortsy and Fedoseevtsy coexist.

There are also communes of Byzantine Rite Catholic Church in Russia (in Moscow, St. Petersburg, Omsk, Nizhnevartovsk), which are in full communion with and subject to the authority of the Pope as defined by Eastern canon law. That tradition is closely connected with the ideas of philosopher and poet Vladimir Sergeyevich Solovyov.

The first attempts to translate books of the Bible into modern Russian language of that time took place in 16th and 17th centuries. But the mentioned works (by deacon of Posolsky Prikaz Avraamiy Firsov, pastor E.Gluk, archbishop Methodiy (Smirnov)) were lost during political turbulence and wars.

Mikhail Iakovlevich Glukharev, known as Archimandrite Makarios, was a Russian Orthodox missionary who translated most of the Old Testament between 1839 and 1847, while a contemporary associate named Gerasim Petrovich Pavsky translated Psalms. Makarios was unable to publish the translation during his lifetime, but a journal called Orthodox Review acquired and published the Makarios Bible in installments between 1860 and 1867, under the title An Experiment of Translation Into the Russian Language.

The aging magazines, more than a century old, were discovered in 1993 in the rare-books section of the Russian National Library, and permission was given for the work to be copied and prepared for publication. In January 1997, the Religious Organization of Jehovah’s Witnesses in Russia "arranged for nearly 300,000 copies of this Bible to be printed in Italy for distribution throughout Russia and the many other countries where Russian is spoken. In addition to Makarios’ translation of most of the Hebrew Scriptures, this edition of the Bible contains Pavsky’s translation of Psalms as well as the Orthodox Church-authorized synodal translation of the Greek Scriptures."

The full-scale Bible translation into Russian language began in 1813 since the establishment of the Russian Bible Society. The full edition of the Bible with Old Testament and New Testament was published in 1876. This work, called also Russian Synodal Bible, is widely used by Protestant communities all over Russia and former USSR countries. Lately appeared several modern translations. The Russian Bible Society since its establishment in 1813 and up to 1826 distributed more than 500 thousand of Bible related books in 41 languages of Russia. Several times in 19-th and 20th centuries activities of the Society were stopped by reactionary policies of the Russian Government.

It was restored in 1990-1991 after a pause connected with the Soviet regime restrictions.

The opening ceremony of the Building of the Russian Bible Society in Moscow was visited by representatives of Orthodox, Roman Catholic, and Protestant churches, who joined their efforts in Bible translation and distribution cause. The editions of Society are based on the universal doctrine of the early Christian church and include non-confessional comments. Over 1,000,000 Bible related books are printed per year by that institution. The Bible is also being translated into native languages and dialects of Russia's ethnic groups.