The Origin of the Chinese Beer and Ancestor Worship 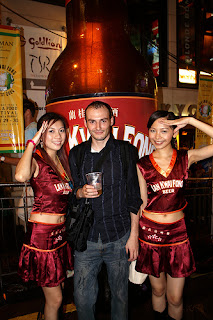 Beer in China (simplified Chinese: 中国啤酒; traditional Chinese: 中國啤酒; pinyin: Zhōngguó píjiǔ) has become increasingly popular, first in China in the last century, and then internationally in the last few decades. While most Chinese beers are pale lagers

, other styles are occasionally found, such as Tsingtao Dark Beer

The history of Chinese beer is around nine thousand years, with recent archaeological findings showing that Chinese villagers were brewing beer type alcoholic drinks as far back as 2000 BC on small and individual scale made with rice, honey, and grape and hawthorn fruits, with the production process / methods similar to that of ancient Egypt and Mesopotamia. The ancient Chinese beer was important in ancestral worship, funeral and other rituals of Xia, Shang and Zhou dynasties, and the beer was called as Lao Li (醪醴 in oracle bone script). However, after Han Dynasty

, which was the case for the next two millennia. Modern beer brewing was not introduced into China until the end of 19th century when Russia first set up a brewery in Harbin

, with another three following (also in Harbin), set up by Germany, Czechoslovakia and Russia respectively.

, produced by Tsingtao Brewery, has been the best selling beer in China for eleven consecutive years, and is also the brand most widely exported to other countries, followed by Zhujiang and Yanjing. Tsingtao Beer is brewed in the city of Qingdao

(formerly spelled Tsingtao in English) which was a German base in the time of unequal treaties and late-colonial western influence in China. The Germans needed beer for their sailors, soldiers and traders, and production continued after they lost the city to the Japanese in World War I.

are now produced in China. This gives them access to the Chinese market, while providing capital and expertise to help upgrade local brewing standards, albeit at the cost of variety.

Only a few brewpubs

exist in China, primarily in major cities such as Shanghai and Beijing which have a resident western community. The most well-known craft brewer in China is Kaiwei Beer House, a brewpub chain based in Wuhan.

in addition to barley.

Interestingly, some beer is produced that uses bitter melon

as the bittering agent.

The following is a partial list of China's major breweries. The vast majority of China's breweries serve only their local vicinity.

J-List is a peaceful island of Japanese pop culture for you
at 02:22