Religion and Diet in Asia 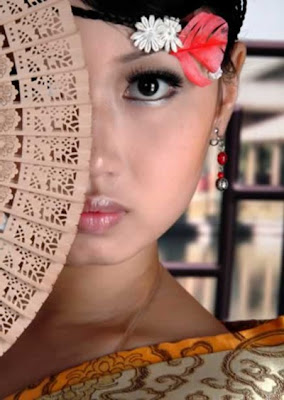 "What bad manners you have! Don't eat with your fingers, use your chopsticks!" For many a child in China, Korea, Japan, and Vietnam

, this parent's reprimand is one of the first lessons in social manners. For each of these ethnic groups, putting food in your mouth with your fingers is viewed as an ill-mannered, rather animal-like act.

One of my Indian friends, however, has told me, "When I eat with a fork or chopsticks, I lose the pleasure of having a meal. If we eat with our fingers, we can also enjoy the heat of the food, the consistency of the curry, and the texture of what we are eating. For us Indians, our fingers are like a second tongue." We need to move away from the slanted view that eating with the fingers is unsanitary and barbaric, while using eating utensils is the "civilized" way to eat a meal. The culinary arts of the world's various peoples are a cultural heritage developed over the centuries. The best way to ensure full enjoyment of each ethnic group's foods is to eat them in the same manner as they do. Even eating with fingers has a set of manners all its own.

In Asia, the custom of eating food directly with the fingers is found in the Middle East, India, and throughout Southeast Asia with the exception of Vietnam. In all such localities, the hands are normally washed thoroughly before and after the meal. Certainly your own hand which you have carefully washed yourself is a more reliable sanitary tool for eating than the fork or chopsticks washed--perhaps haphazardly--by someone else. Moslems, Hindus, and the members of other sects may use only their right hand for eating, with the left hand, deemed less clean, used for other purposes, never coming into contact with food. In localities where eating with the hand is the tradition, people do not use tables or chairs, instead gathering around the food placed on a mat or similar floor covering and using the hands to partake of food from a common central bowl or plate.

In contrast, cultures which use chopsticks

apportion the food among those joining in the meal, with each person eating from the individual dishes in front of him. In particular, soup and the staple food, rice, of such "chopstick regions" are served separately to each individual, and small individual bowls have developed in such regions for this purpose.

, first began to appear together on European tables in the 17th century. Chopsticks, on the other hand, have a much longer history and were widespread in China as long ago as the second century B.C. Korea, Japan, and Vietnam

, all of which were strongly influenced by Chinese civilization, also came to use chopsticks. Similarly, the peoples of Mongolia and Tibet

, both of which border and historically are sometimes a part of China, are familiar with chopsticks but normally do not use them in their everyday meals.

In the western areas of Asia, the representative food can be seen as bread, whereas in the eastern regions of the continent, rice would occupy this position. This is true to the extent that in Japanese and Chinese, the term "eating rice" is synonymous with "having a meal." Let's look for a moment at these staple foods and the methods of preparing them.

First, speaking broadly, in western India and farther west, wheat is an important foodstuff, and it is all ground to flour and baked or otherwise cooked. It is used to make bread or nan, the large flat or bowl-shaped bread of western Asia, and in central and northwestern India, wheat flour is baked unleavened into chapati

. In contrast, in all of Asia to the east of eastern India, the staple food becomes rice, with the whole grains usually boiled or streamed for eating without being ground into flour.

, but the continent also includes peoples who find their staple foods still elsewhere. The varieties of the staple foods of these various ethnic groups are closely linked to the environments in which they live and their own histories. Here, in order to give some thought to the traditional dietary cultures of Asia, let us imagine a map of Asian staple foods as they stood in the 15th century

On this map, Mongolia

to the north and Central Asia are blank because in these areas there was no active agriculture, it being limited to small-scale farming in the oases, and these regions were inhabited by pastoral nomads. For these nomadic peoples, the milk and meat of their livestock were important foods, and they had only such grains as they could procure through trade with the farming peoples to the south.

In the deserts running from southern Iran

to the Arabian Peninsula

, dates were cultivated in the oases, and the dried dates were an important source of nourishment for those engaging in animal husbandry.

civilization, and a variety of barley suited to cold climates (processed into the parched barley flour called tsampa) also became a staple food in the highlands of Tibet

. There barley held sway, while to the east in North China wheat was again the staple diet, where it was made into a kind of steamed bread called mantou or thick wheat noodles.

Various millets--sorghum, German millet, proso millet and the like--were introduced into East Asia from ancient India, long ago passing through the northern mountains of Southeast Asia and on eastward, eventually reaching North China and Manchuria

. The ancient Chinese culture that grew up along the Yellow River of North China

relied heavily on German millet as its staple. This ancient millet-eating region, however, was later overtaken by the development of cultures whose staple foods were wheat, barley, and rice, and at present, millet remains the sole staple of northern Korea. In India, millet is normally ground and baked as chapati. In North China and Manchuria, it is normally ground, formed into balls, and steamed for consumption, or else the whole grains are boiled into a gruel and eaten. In Southeast Asia, the crops of longest standing are taro, yams, bananas, and others which are not planted as seeds but which are cultivated through transplanting. These, however, were displaced to a major extent by rice and other grains which appeared later, until today the grain-cultivating cultures have taken root in Asia to the extent that the above form the staple diet only in eastern Indonesia and on the islands that dot Bashi Strait between Taiwan and the Philippines. They are still important crops on the islands of Oceania where grain cultivation did not penetrate earlier dietary patterns.

One point that must be made concerning animal proteins deals with the use of milk of domestic animals. In Mongolia in northern Asia, Central Asia, and from India westward, milk from a variety of domestic livestock is made into yoghurt, butter, cheese and other dairy foods, which serve as an important source of nourishment. China, Korea, Japan and Southeast Asia, however, traditionally have not used milk this way. Instead, these non-milk areas developed a variety of fermented foods made from soy beans--for example soy sauce and soy bean paste--and rely heavily on these as sources of vegetable protein in their daily lives.

The foods selected for consumption by various ethnic groups and their outlook on food and eating manners are closely related to religion. It is well known that Moslems do not eat pork, but other animals as well must be slaughtered by a Moslem or they cannot be eaten by followers of Islam. The ninth month of the Islamic calendar is a month of fasting, when Moslems may not eat or drink during the daylight hours. For Hindus, the cow is sacred and the eating of beef is forbidden. Many Hindus go further and are vegetarians for religious reasons.

In China, the influence of Taoism has led to the deeply-rooted belief in food as a way to long life. Food is thus deemed to be medicinal, and all foods are classified according to their medicinal properties. For example, eggplant is medicinally effective, it is said, in cooling the blood, so that it should be eaten by those with high blood pressure. Ginger, on the other hand, heats the blood and thus is beneficial to persons with anemia. In this way, a balancing of the condition of the body is sought through food.

In Japan, through the influence of the Buddhist proscription on killing, meat was not commonly eaten until the latter part of the 19th century.

The various peoples of Asia each developed their own ethnic cuisine through the historical interaction of environment and culture. Still, the major civilizations that have appeared in Asia have each exerted an influence on the dietary lives of people of the continent.

Beginning from the west, the three main civilizations would be Persian-Arabian, Indian, and Chinese

Historically, the food structure of Persian-Arabian civilization began with cooking techniques innovated in ancient Persia and carried forward by Persia during the Sassan Dynasty. With the coming of Islam, to these were added the dietary customs of the Arabs, and through the growth of the Turkish Empire

, Turkish methods of cooking were also incorporated in the culinary tradition. In the areas covered by this dietary civilization, nan became widespread, but on special occasions or among the upper classes, the rice dish called pilau was also frequently served. The most important meat was mutton, and a representative food in this region would be the kebab, deriving from Turkish cooking. Another feature is the plentiful use of hot peppers, black pepper, cloves, and other strong spices. Since this is also an Islamic region, the consumption of pork is of course forbidden and other Islamic dietary regulations rule the inhabitants' eating habits. With the spread of Arab culture

to North Africa, the cooking practices of Persian-Arabian civilization also advanced into this area, and at the same time, the expansion of the Turkish Empire carried its influence as far as the Balkan Peninsula

, the shores of the Black Sea, and Greece.

One characteristic of cooking in Indian civilization has been the daily use of curry in meals. Here, too, through the influence of the Hindu religion, cows are used only for their milk and not for meat. A butter oil called ghee

is frequently used in cooking. In addition to rice, chapati made from wheat or barley are also a staple part of the diet, and beans also play an important role in meals.

In Chinese civilization, pork is frequently used, but traditionally the Chinese have not used the milk of their domestic animals. The Chinese also developed the fermented soy bean preparation jiang

, primarily in the form of paste or liquid, as a ready-made seasoning. Fats and oils are frequently employed in cooking, and the use of dried and preserved foodstuffs is an other characteristic of Chinese cuisine. The foods, spices, and seasonings go beyond being mere foodstuffs; they are of great importance in cooking based on their classification as medicines for long life. As mentioned earlier, the use of chopsticks and small, individual bowls is also a characteristic of the Chinese cultural sphere.

In Southeast Asia, which has been influenced historically by both Chinese and Indian civilizations, both influences are evident today--the Indian in the curried dishes

The arid region stretching from Central Asia to the Caspian sea

has been a crossroads not only of culture but of cooking as well. In the oases from Mongolia to Sinkiang

, Chinese cooking has made its mark, and Indian cuisine has penetrated to the northwest to reach Pakistan

, where it has met and intermingled with the foods and methods of preparation of Persian-Arabian culture

J-List is a peaceful island of Japanese pop culture for you
at 02:37