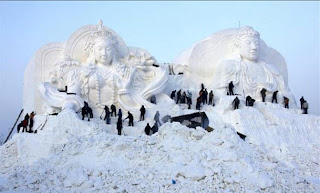 , the capital of Heilongjiang

province of People's Republic of China, is one of the sources of ice and snow culture in the world. Geographically, it is located in Northeast China under the direct influence of the cold winter wind from Siberia

). There are ice lantern park touring activities held in many parks in the city. Winter activities in the festival include Yabuli alpine skiing, winter-swimming in the Songhua River, and the ice-lantern exhibition in Zhaolin

The Harbin festival is one of the world's four largest ice and snow festivals, along with Japan's Sapporo Snow Festival

The 2007 festival featured the Canadian theme, in memoriam of Canadian doctor Norman Bethune

. It was also a Guinness Record of the largest snow sculpture: 250 metres long, 28 feet (8.5 m) high, using over 13,000 cubic metres of snow. The composition consisted of two parts: "Niagara Falls" and "Crossing the Bering Strait" (the latter depicting the migration of the First Nations).

Swing saws are used to carve ice into blocks, taken from the frozen surface of the Songhua River

. Chisels, ice picks and various types of saws are then used by ice sculptors to carve out large scaled ice sculptures, many of them intricately designed and worked on all day and night prior to the commencement of the festival. Deionised water

can also be used, producing ice blocks as transparent as glass to make clear sculptures rather than translucent ones. Multicoloured lights

are also used to give colour to ice, creating variations on sculptured spectacles when lit up especially at night. Some ice sculptures made in previous years include: buildings and monuments of different architectural types and styles, figures including animals people and mythical creatures, slippery dips or ice slides and lanterns. Apart from winter recreational activities available in Harbin, these exquisitely-detailed, mass-produced ice sculptures are the main draw card in attracting tourists around the world to the festival.

Harbin is originally a Manchu word meaning "a place for drying fishing nets". Harbin has very cold winters and is often called "Ice City". Harbin is well-known for its beautiful ice sculptures in winter and plays an important part in China's trade with Russia. In the 1920s, Harbin was considered China's fashion capital as new designs from Paris and Moscow reached there first before arriving in Shanghai. Harbin is also a potential candidate for the 2022 Winter Olympics

As the major refugee center for the East European Jewish

Zhong Yang Street (Central Street, also known, using the Russian word for Chinese, as Kitaiskaya Street), one of the main business streets in Harbin, is a perfect remnant of the bustling international business activities at the turn of the 20th century. The 1.4-km long street is a veritable museum of European architectural styles: Baroque and Byzantine

, Saint Sophia Cathedral, is also located in this central district of Daoli

. St. Sophia took nine years to build and was completed in 1932. It has now been made into a museum as a showcase of the multi-cultural architecture of Harbin.

, so they donated money to build a Chinese monastery in 1921, the Ji Le Temple

. There were more than 15 Russian Orthodox churches and two cemeteries in Harbin until 1949. Mao's Communist Revolution

, and the subsequent Cultural Revolution

, saw many of them destroyed. Now, about 10 churches remain, while services are held only in the Church of the Intercession in Harbin

The Harbin local culture is based on Han culture

. This combination of cultures influences the local architecture style, food, and customs.

Harbin today is still very much influenced by its Russian past. A city once under Russian rule, it is now a center of trade with that country.

, an extension of the Trans-Siberian Railway

, and Harbin, known formerly as a fishing village began to prosper as the largest commercial, economic center of North Eastern Asia.

encouraged Russian settlement in their important Trans-Siberian-Railway outpost by waiving the then 25 year long military service. For Jews who settled there, the restrictions applying in Russia were also waived.

The local cuisine in Harbin is also Russian-influenced. Harbin's bakeries are famous for their bread (lie-ba

in local dialect, derived from the Russian word khleb

) are another notable product, in that they tend to be of a much more European flavour

than other Chinese sausages

that is such a huge buddha! it sure is one art of beauty for an ice sculpture.

Have a Happy New Year and a Prosperous year 2012 ahead...