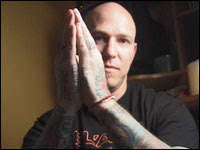 "Here in meditation, we say, 'Stop thinking, pay attention to the breath.' And your mind says, 'F*** you. I will do whatever I want,'" says Levine. "We begin to understand that it is inner anarchy."
at 01:54

We're publishing a new book by Brad Warner this coming Spring called Zen Wrapped in Karma Dipped in Chocolate. Please contact me if you would like a review copy for possible mention on your blog! I'm at kim@newworldlibrary.com.