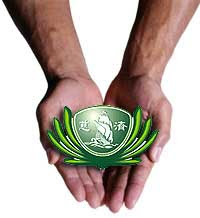 The Tzu Chi Foundation (慈济基金会;Cí Jì) is one of the three largest Buddhist organizations in Taiwan (the others being Fo Guang Shan and Dharma Drum Mountain). Tzu Chi was founded by Master Cheng Yen, a nun, on April 14, 1966 in Hualien, Taiwan, after she was inspired by her master and mentor, the late Venerable Master Yin Shun ((印順導師;Yin Shun Dao Shi) a significant proponent of Humanistic Buddhism) with the great expectation of: "work for Buddhism and for all sentient beings". The society started as a group of thirty housewives who saved a small amount of money each day, and has grown to have approximately 10 million members worldwide today.

Whereas many Buddhist societies focus on personal enlightenment and meditation, Tzu Chi focuses on community service and outreach (especially medical, educational, and disaster relief). Today, Tzu Chi is considered to be one of the most effective aid agencies in the region.

Tzu Chi maintains a small number of nuns, and conducts its mission via an international network of volunteers. The volunteers are easily recognized by their uniforms (navy blue shirt with a ship imposed on a lotus flower as a logo on the left breast; white pants, shoes and socks; and a black belt with the same lotus ship logo as a clasp). There are also differing variations of the uniform, each symbolizing a different aspect of the foundation. Its youngest members known as the Tzu Shao, wear pale blue instead of the above navy blue, while its teenaged and college students wear sky blue. The crest differs slightly between the groups, with the boat symbol in the center of the adult members, and a candle in the center for its younger members. Tzu Chi relief workers have been known therefore as "blue angels" for their distinctive uniform. Occasionally, sometimes Tzu Chi volunteers have been known to refer to their uniforms as 藍天白雲 (Lan Tian Bai Yun), or Blue Sky White Clouds.
Tzu Chi has many suborganizations, of which the Tzu Chi Collegiate Association (慈濟大專青年聯誼會) is one of the most prominent. With chapters at universities worldwide, Tzu Chi Youth allows the university student to be involved with Tzu Chi's work on both local and international levels.

Tzu Chi remains a non-profit organization and has built many hospitals and schools worldwide, including a comprehensive education system within Taiwan spanning from kindergarten through university and medical school.

Tzu Chi has many hospitals and universities Tzu Chi help people in need from vistations to nursing homes to brighten up their days, to the needs bone marrow sugery, to the simple things such as a washing machine for the struggling sungle mother. Tzu Chi has its very on television channel "Da Ai" along with its very own news and televisions shows Tzu Chi has chinese schools set up in locations such as Australia, teaching not only chinese, but also the ways on compassion, and sign language.

While the Tzu Chi Foundation has Buddhist origins and beliefs, the organization is also popularly known for its selfless contributions to society in numerous ways in the areas of Charity, Medicine, Education, and Culture. The official motto, or concept behind Tzu Chi Foundation is the (四大志業,八大腳印), which means, "Four endeavors, eight footprints". The eight footprints are charity causes, medical contributions, education development, humanities, international disaster assistance, bone-marrow donation, community volunteerism, and recycling.

Simultaneously bearing the lotus fruit and flower, the Tzu Chi logo symbolizes that we can make the world a better place by planting good seeds. Only with these seeds can the flowers bloom and bear fruit. A better society can be created with good actions and pure thoughts.The petals represent the Noble Eight Fold Path in Buddhism that Tzu Chi members use as their guide.


Due to their apolitical stance, Tzu Chi has been allowed by the Chinese government to expand their activities into China. Master Cheng yen has talked about building A Bridge of Love between China and Taiwan. When devastating floods hit southern and central China in 1991, Tzu Chi was involved in relief operations. The group has built schools, nursing homes, and entire villages including infrastructure in poor inland areas, for example, Guizhou province.

In 2008, Tzu Chi has also sent medical aid, volunteers, living utilities and food in response to the 2008 Sichuan earthquake.

Tzu Chi does not only come to the aid of close neighbours but also on an international level, from providing food to clothing to poverished nations, to helping to clean up ruins and collected donations from all Tzu Chi locations world wide for distasters such as the Asia's Tsunami in 2002 to Hurricane Katrina in America.

Some syncretic Buddhist and Christian observers have commented on the similarity between Guan Yin and Mary of Christianity, the mother of Jesus Christ. The Tzu-Chi Foundation, also noticing the similarity, commissioned a portrait of Guan Yin and a baby that resembles the typical Roman Catholic Madonna and Child painting.
at 00:34

I'm Italian. I am an apprentice of the Buddhism Zen. I approach me to this philosophy using the art of Archery. Alex greets