The Canon of Scripture 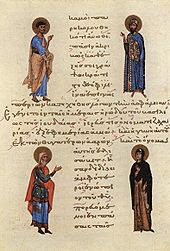 The word "canon" is derived from the Greek noun κανών "kanon" meaning "reed" or "cane," or also "rule" or "measure," which itself is derived from the Hebrew word קנה "kaneh" and is often used as a standard of measurement. Thus, a canonical text is a single authoritative edition for a given work. The establishing of a canonical text may involve an editorial selection from biblical manuscript traditions with varying interdependence. Early manuscript versions of the Hebrew Bible are represented in different languages such as the Greek Septuagint

(LXX), the apostles did not otherwise leave a defined set of new scriptures; instead the New Testament developed over time.

The writings attributed to the apostles circulated amongst the earliest Christian communities. The Pauline epistles were circulating in collected forms by the end of the first century AD. Justin Martyr

, in the early second century, mentions the "memoirs of the apostles," which Christians called "gospels" and which were regarded as on par with the Old Testament.

. He was a scholar well educated in the realm of both theology and pagan philosophy. Origen decided to make his canon include all of the books in the current Catholic canon except for four books: James, 2nd Peter, and 2nd and 3rd epistles of John. He also included the Shepherd of Hermas

which was later rejected. The religious scholar Bruce Metzger

described Origen's efforts, saying “The process of canonization represented by Origen proceeded by way of selection, moving from many candidates for inclusion to fewer.” This was the first major attempt at the compilation of certain books and letters as authoritative and inspired teaching for the Catholic Church at the time.

Needless to say there are various theologians of the 2nd and 3rd centuries that wrote a great deal of works and used the letters of the apostles as foundation and justification for their own personal beliefs. However, there was still the problem of the Roman Empire, and while the persecutions of the Roman Empire were many and extreme, the persecution still occurred and possibly interfered with the initial canonization of the New Testament. This period in church history writings is known as the "Edificatory Period" and was followed by the "Apologetic" "Polemical" and "Scientific" Periods. Some of the Christian writers of this edificatory Period are: Irenaus

. This stagnation of official writings lead to a sudden explosion of discussions after Constantine I

A four gospel canon (the Tetramorph) was asserted by Irenaeus, c. 160. By the early 200's, Origen of Alexandria may have been using the same 27 books found in modern New Testament editions, though there were still disputes over the canonicity of Hebrews, James, II Peter, II and III John, and Revelation (Antilegomena

). Likewise by 200 the Muratorian fragment

shows that there existed a set of Christian writings somewhat similar to what is now the New Testament, which included four gospels and argued against objections to them. Thus, while there was a good measure of debate in the Early Church over the New Testament canon, the major writings were accepted by almost all Christians by the middle of the third century.

In his Easter letter of 367, Athanasius, Bishop of Alexandria

, gave a list of exactly the same books as what would become the New Testament canon, and he used the phrase "being canonized" (kanonizomena) in regards to them. Athanasius also included the Book of Baruch

and the Letter of Jeremiah

in his Bible. He also eliminated the book of Esther from his Bible.

The African Synod of Hippo, in 393, approved the New Testament, as it stands today, together with the Septuagint books, a decision that was repeated by Councils of Carthage

in 397 and 419. These councils were under the authority of St. Augustine

, who regarded the canon as already closed. Pope Damasus I's Council of Rome in 382, if the Decretum Gelasianum is correctly associated with it, issued a biblical canon identical to that mentioned above, or if not the list is at least a sixth century compilation. Likewise, Damasus' commissioning of the Latin Vulgate

edition of the Bible, c. 383, was instrumental in the fixation of the canon in the West. In 405, Pope Innocent I sent a list of the sacred books to a Gallic bishop, Exsuperius of Toulouse. When these bishops and councils spoke on the matter, however, they were not defining something new, but instead "were ratifying what had already become the mind of the Church." Thus, from the fourth century, there existed unanimity in the West concerning the New Testament canon (as it is today), and by the fifth century the East, with a few exceptions, had come to accept the Book of Revelation and thus had come into harmony on the matter of the canon.

Martin Luther made an attempt to remove the books of Hebrews, James, Jude and Revelation from the canon (echoing the consensus of several Catholics, labeled Christian Humanists — such as Cardinal Ximenez, Cardinal Cajetan, and Erasmus — and partially because they were perceived to go against certain newly invented Protestant doctrines such as sola scriptura

), but this was not generally accepted among his followers. However, these books are ordered last in the German-language Luther Bible

Nonetheless, full dogmatic articulations of the canons were not made until the Council of Trent

of 1546 for Roman Catholicism, the Thirty-Nine Articles

of 1563 for the Church of England, the Westminster Confession of Faith

of 1647 for British Calvinism, and the Synod of Jerusalem