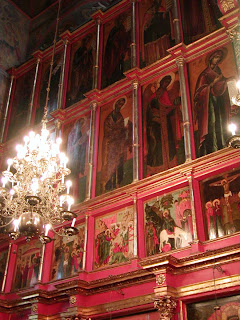 In Eastern Christianity an iconostasis (plural: iconostases) is a wall of icons and religious paintings, separating the nave from the sanctuary in a church. The word comes from the Greek εἰκονοστάσι(-ον) (eikonostási(-on), still in common use in Greece and Cyprus), which means "icon stand". Icon stand also refers to a portable icon stand that can be placed anywhere within a church. The iconostasis evolved from the Byzantine templon, a process complete by the fifteenth century.

The nave is the main body of the church where most of the worshippers stand, and the sanctuary is the area around the altar, east of the nave. The sanctuary is usually one to three steps higher than the nave. The Iconostasis does not sit directly on the edge of the sanctuary, but is usually set a few feet back from the edge of the top step. This forms a walkway in front of the iconostasis for the clergy, called a soleas. In the very center of the soleas is an extension (or thrust), often rounded, called the ambon, on which the deacon will stand to give litanies during the services.The iconostasis, though often tall, rarely touches the ceiling. Acoustically, this permits the ekphoneses (liturgical exclamations) of the clergy to be heard clearly by the faithful.

The iconostasis typically has three openings or sets of doors: the Beautiful Gates or Holy Doors in the center, and the North and South Doors to either side. The Beautiful Gates are sometimes called the Royal Doors, but that name more properly belongs to the central doors connecting the narthex, or porch, to the nave. They remain shut whenever a service is not being held. Modern custom as to when they should be opened during services varies depending upon jurisdiction and local custom. In some places they are nearly always open and are closed only at specific times; in others they are nearly always shut and are opened only at specific times.

The North and South Doors are often called Deacons' Doors because the deacons use them frequently. Icons of sainted deacons are often depicted on these doors (particularly St. Stephen the Protomartyr and St. Ephrem the Syrian). Alternatively, they may be called Angels' Doors, and the Archangels Michael and Gabriel are often depicted there. The South Door is typically the "entrance" door, and Michael is depicted there because he is the "Defender"; the North Door is the "exit", and Gabriel is depicted here because he is the "Messenger" of God.

In many monastery churches and chapels (though often not in the catholicon, the monastery's main church) one may find iconostases with only two doors: the Holy Doors and the North Door. These churches are used for simpler monastic observances when only a hieromonk would be serving alone. Since the priest seldom uses the South Door when he is serving the Divine Liturgy, the chapel can be made smaller by omitting that door.

A number of guidelines or rubrics govern which icons are on which parts of the iconostasis, although there is some room for variation. In its fullest Slavic development it comprised five tiers of icons:

The bottom tier is sometimes called Sovereign. On the right side of the Beautiful Gates (from the nave facing forward) is an icon of Christ (often Pantokrator), which symbolizes his Second Coming and on the left side is an icon of the Theotokos (Virgin Mary), symbolizing Christ's incarnation, and entrance into this world. Therefore, all things take place between Christ's first and second coming. Other icons on this tier beside those on the doors themselves usually include depictions of the patron saint or feast day to which the church is dedicated, the patron saint of the nation (Greece is St. John the Baptist, Russia is St. Nicholas of Myra). Above this are two interchangeable tiers: the Deisis and the Twelve Great Feasts:

In the center of the Deisis is a large icon of Christ Enthroned. To the left and right are icons of John the Baptist and the Theotokos in attitudes of supplication. They are often flanked by icons of the Archangels Michael and Gabriel, then Sts. Peter and Paul, and then any other important Church Fathers that may be desired for inclusion as space allows.

The Feasts tier contains icons of the twelve Great Feasts of the liturgical year with the icon of the Mystical Supper in the middle. Above this, the top two tiers are also interchangeable with each other:

The Sovereign tier is always present, but all the others may be omitted. Preference is given to the Deisis or the Feasts tiers if only some of them can be included. Only the largest and most elaborate iconostases include all five.

There are rules regarding who may enter or leave the sanctuary, and by which door. Neither the Beautiful Gates nor the space between them and the altar may be used by laity under any circumstances, although infant boys are taken into the altar through them in the "churching" rite, or, if a girl, the infant is simply presented at the doors. Bishops may enter through the Beautiful Gates at any time; priests and deacons may do so only at specific times during the services when the Gates are open (but during Bright Week they always enter and exit through them). All others enter the sanctuary through the side doors.

In a convent only the abbess and elder nuns are permitted to enter the sanctuary, and only by the side doors. The abbess may enter at any time, but the other nuns need a blessing to enter.

Male members of the laity who are usually allowed to enter the sanctuary include those involved in the running of the particular church, i.e. cantors and choristers, altar servers, church keepers and vestrymen, etc. Entering the sanctuary for no good reason or without a blessing is forbidden even if no religious service is being held at the time.

These guidelines were developed over the course of many centuries, with both theologically symbolic and practical reasons for them.

Archaeological evidence from the St. John of Stoudios monastery in Constantinople suggests that the Iconostasis evolved from the early templon. A basilica dedicated to John the Baptist was built in 463 AD. In it the chancel barrier surrounded the altar in a π shape, with one large door facing the nave and two smaller doors on the other sides. Twelve piers held chancel slabs of about 1.6 meters in length. The height of the slabs is not known. The chancel barrier was not merely a low parapet (a short wall); remains of colonnettes have been found, suggesting that the barrier carried an architrave on top of the columns.

The templon gradually replaced all other forms of chancel barriers in Byzantine churches in the 6th, 7th, and 8th centuries except in Cappadocia. Sacred tradition ascribes the invention of the solid iconostasis to Saint Basil the Great.

As late as the 10th century, a simple wooden chancel barrier separated the apse from the nave in the rock-cut churches in Derinkuyu, though by the late 11th century, the templon had become standard. This may have been because of the veneration and imitation of the Great Church Hagia Sophia in Constantinople, though the columnar form of chancel barrier does predate Hagia Sophia.

In recent years, especially in the diaspora, there has been a liturgical movement favouring a more open style of Iconostasis. These Iconostases may be only one or two tiers, with a wide opening for the royal doors.

The rood screens or pulpitums that most Roman Catholic large churches and cathedrals in many parts of Europe had acquired by late medieval times occupied a similar position between chancel and nave but had a different function. The choir was usually east of the screen. Many survive, often most completely in Scandinavia, and more were built in the Gothic Revival, particularly in Anglican churches in England. In examples in wood painted panels typically only went up to about waist height, with a section with wooden tracery above allowing a view through, and then a large carved beam supporting a rood cross crucifix, often life-size, above. Larger churches had stone screens, which might impede virtually all view by the congregation.

The Oriental Orthodox and Eastern Catholic churches which follow Oriental rites differ among themselves about the use of the iconostasis. The Armenian and Syriac churches often use a curtain, but not a solid iconostasis. The Coptic and Ethiopian churches use an iconostasis often made of latticework, so that it is semi-transparent.
at 07:13